So here’s a progress update on the biro ink drawing I’m working on at the moment. It’s coming along really well though it is taking quite a long time to complete. The thing is, you reach a point in a drawing where you really start to see how it will turn out, and inspired by this you open yourself to  an internal pressure to get it finished. This can be a good thing, you are energised to put in the effort but, it can also be a bad thing because if you’re not careful you rush things, and when that happens you make mistakes. Although it can often be a little frustrating at times it is always better for me in these situations to take a deep breath, take frequent breaks to take stock of the marks I’m making on the paper and accept the fact that slow is good, and that I’ll get to the end, one small step at a time. I’m having to be extra mindful with this one too. It is not a commission but a work based around a request, and the last thing I want to do is muck it up. I want it to be the best one I’ve done so far and as a result my internal pressure gauge is already off the scale!

From this detail shot you can see I hope, how much pen work goes into these things, so you get an understanding of how important it is for me not to make mistakes. I spend a lot of time scribbling on a separate sheet to get the pen running right and my hand steady (I have a natural shakiness at close range). There’s a discipline to cross hatching, getting the tone and line direction consistent which requires huge concentration. Sometimes it just doesn’t work, the angle of the pen gives too much black or the pressure you’re using is too firm and at times like this you just have to step back, scribble on a loose sheet until you’re happy and then come back to it. No one ever said this was easy, so I try not to think that. In essence the greater the effort the greater the reward. Let’s see how I cope with the rest of it.

I realised this morning, with a somewhat heavy heart, that I hadn’t posted here for over a month. The shame induced by this sorry situation was dealt with swiftly, over a cup of coffee, as I set up the computer on the kitchen table and took some photographs of the latest completed drawing. Working here rather than in my little studio has its disadvantages, the cat likes to clamber over me and wander freely over the keyboard, but the light is great and the french windows afford me a view of the sky and some trees which lift the spirits on a cold morning.

So here, finally, is the finished version of The Bull. Regular followers will know that this drawing has taken me an age to complete, and has also been the reason behind a creative journey from unbounded enthusiasm, through plodding frustration, and finally to a kind of relieved joy. Shutting it away in a drawer and going off to do other things helped to put some distance between me and the problems I had with it but, what actually tipped the balance was showing it to my partner and talking the problem through. Fresh eyes and a critical view from someone possessed of no mean creative talent themselves, helped me to see what I had previously not been able to visualise. With refreshed urgency I was then able to finish it off in a single afternoon sitting.

I have just started reading a very interesting little book about drawing and I’ll post my thoughts on it when I’ve got a bit further through it. I’m only a couple of chapters in but have already come across a possible explanation as to why this particular image was so problematic for me. Courage, or the lack of it, was holding me back. The fear that I would end up making a complete pigs ear of things was actively stopping me from making marks on the paper, even in light pencil. My minds eye knew roughly what I was after but the connection between imagination and enactment was somehow broken. The fear of failure, of coming away from something one had already invested so much time in with little to show for it, had called a halt to the free flow that had powered the making of the drawing thus far. By taking a break and sharing it with another set of eyes I realised that it was the strength of my conviction that was holding everything up. Rather than deciding on a single course of action and working that through, I had been sketching out possible solutions without really settling on any of them. I had put myself at the centre of a loop I couldn’t get out of. Loop broken, I was able to focus and finish the task quite easily. Much important learning was done. This doesn’t mean it won’t happen again, but at least I’ll have a better idea of how to deal with it when it does.

I hope you enjoy the picture as much as I do now. 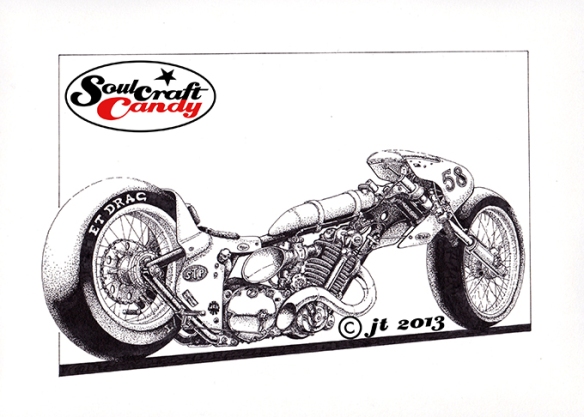 Maintaining momentum, and keeping the creative juices flowing, is always one of the challenges one has to overcome when engaging in an artistic pursuit which has to fit in around the everyday goings on of ones life. It’s easy to loose the flow, and returning to an unfinished image rarely results in picking up the thread exactly where you left it. I suppose that one of the key disciplines of any artist is to develop techniques which enable you to do this as seamlessly as possible. I don’t have any hard and fast routines that I follow in order to make this easier but one thing I do do is always try and have a number of little projects on the go at any one time, all at different stages. This means that when I’m deep in thought about how to solve a problem on one picture, there is always another close by which I can engage with, one where the work is at a stage where I don’t have to overcome any issues in the execution. So dipping in and out of things keeps the creative ball rolling rather than running to a dead stop as endless time is wasted staring at a problem until the answer comes. In fact this act of “dotting about” helps me to uncover the answers that I’m looking for.

So whilst pondering what to do about the background for the picture featured in the last post, I had a good look through the “pending ideas you should really finish” pile and pulled one out to serve as the “other” project. I had a dabble last year with some sketches following a visit to a drag race meeting, made a couple of drawings, and then promptly left it there. I’m not sure why. This drawing above was all ready for some treatment having been carefully pencilled out onto a nice bit of drawing paper, I just hadn’t thought much about how to take it further. I’m not sure what inspired my choice of technique, it could have been my recent visit to Tate Modern to see the Roy Lichtenstein show or something else entirely. Doing something different really appealed though and so out came the trusty old technical pens and I set to work.

Although the dot shading is a madly labour intensive way to do things, this drawing proved to be very enjoyable to do and a pleasant alternative to the paint and ink technique I’ve been doing a lot of recently. You have to take a break every now and then though as all the little specks of black make your eyes go a bit funny after a while. It’s a lovely way to gradually build up tone though and really plays to the cartoon nature of the drawing. I’ve called it “The Slugger” after a certain baseball bat, a blunt though effective instrument that gets the job done. I hope you like it.