Some years ago, for anyone working in and around the twin universes of design and marketing, there was much talk about authenticity. According to contempory sooth sayers of the time, this was to be the next “secret sauce” that would enhance the relationship between your brand and your customers, and make you more “sticky” to those discovering you and your products for the first time. Without it your brand was merely a sham, a cheap facade lacking integrity, purpose and the will to live. And so on and so forth etc etc. Like many of these kinds of things the shelves were suddenly loaded with books on the subject written by myriad experts who quite co-incidentally had all hit upon the same thing at the same time, funny that. Anyway, we all merrily devoured these publications in the hope it would give us greater understanding and some kind of competitive advantage. I’ll admit it, I read some too, though I don’t remember much of it making a great impression on me as a designer. I think the marketeers benefitted more from this new wisdom than we did. To us, if it didn’t come from where you said it did, and it didn’t do what it said on the tin, then chances are that no amount of authenticity was going to help you shift a rubbish product.

Nowadays it is very much part and parcel of the creative communications lexicon, though one does wonder sometimes whether brands that bandy it about really do have any connection to it. So what’s all this about? Well, I was reading some correspondence in a magazine the other day where a gentleman was lamenting the demise of real, authentic bikers. This got me thinking. Obviously, to this chap, the owning and riding of a motorcycle is no longer enough to lend one any reality or authenticity as a motorcyclist. I wondered what extra credential one would have to possess in order to fit the bill these days? Perhaps droning on in a monotonous tone as one dismisses far eastern made products as rice burners, would be one, or maybe it’s about the fact that modern bikers don’t want to smell of motor oil and have perpetually grubby finger nails, who knows. This was rich, fertile ground for a cartoon though, so I put pen to paper to see what would come out. This is a first stab at the idea, there is room for improvement, but I think it works quite well and says something about this whole subject area, about whether things are really what they say they are and how important is it to us anyway?

Lots of communities of people will tell you they are united, but usually nothing could be further from the truth. Each one is invariably made up of lots of tribes, groups, gangs, cliques and any number of little sub sets, all seeking to be different from each other. Bikers are no different really. If you ask a biker why he/she rides a bike, part of the answer will be something to do with freedom of expression and individuality. This is all fine, though subsequently complaining that no one is the same as you surely defeats the object of the second part of this premise. That’s a cartoon for another time. My parting thought, whichever group you’re in, one thing we should share is a sense of humour. Thanks for dropping by, I hope you enjoyed coming along for the ride today. 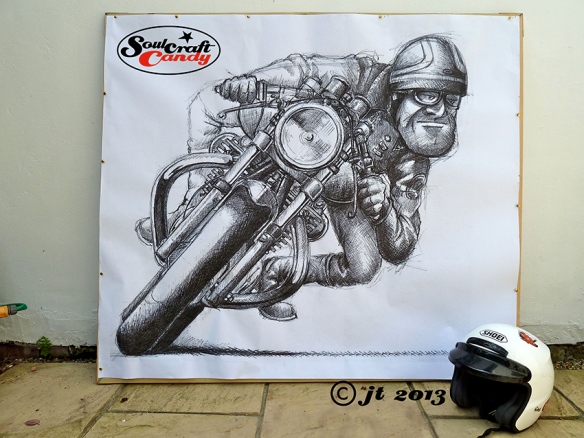 The above phrase, regularly used and a feature of the colloquial landscape that is modern english, often refers to a bout of over indulgent and often excessive behaviour, invariably fueled by alcohol.

Despite there being little alcohol consumed at the time this idea was born, the phrase seems most apposite in describing the birth of the above creation. For quite a while now, the suggestion that the drawings should perhaps take on a larger scale has been hovering about in the back of my mind but, achieving this jump up in size presented lots of challenges that would need to be overcome. Aside from wondering where in the house one could create a big enough space to do it, the mechanics of transferring a basic layout onto large boards or sheets is something I’ve not yet figured out. I know that simply drawing straight onto large format sheets is tricky, ones perceptions of perspective and proportion are distorted, and being so close to the image as you make it means you can’t “see” all of it, so you have to keep standing back to check on your progress. There are lots of tools out there to help with these issues like projectors and setting up a copying grid, but the fact remains that it’s a daunting undertaking if you’re not practiced at it. I really wanted to see what one would look like blown up, before embarking on a creative exercise of this size.

Fortunately for me, a good friend who runs a small architectural office offered the use of his A0 plotter to run something out as an experiment. I knew that printing out a massive version of one of the finished biro drawings would rapidly consume his stock of black printing cartridges, not a good idea seeing as this was a generous offer already, so elected to use one of the early sketches which is much lighter in tone. The scale for the print was based on the size of the front wheel which would be approximately life size. There was no way it was going to fit on a single piece of paper either, so I split the picture in two with a bit of an overlap so it could be trimmed and glued together afterwards. The sketch was re-scanned at 1200 dpi to avoid any pixelation when blowing it up, resized across two sheets of A0 light weight plotter paper and converted into a pdf file to keep the file size down a bit, we didn’t want to be sat there for hours while the plotter got on with the job.

Back at base the sheets were trimmed on the kitchen table and the two edges stitched together with spray glue, before being pinned to a rough frame made from some scrap lengths of baton found in the shed. Choosing to do this on a really hot day at the start of a very rare heatwave meant the exercise was a little fraught and the subsequent union a little wrinkly, but it looks fine for what I wanted it to achieve. I took a couple of photos for the blog post with one of my crash helmets in the shot and the original sketch to give you an idea of the size of this thing. 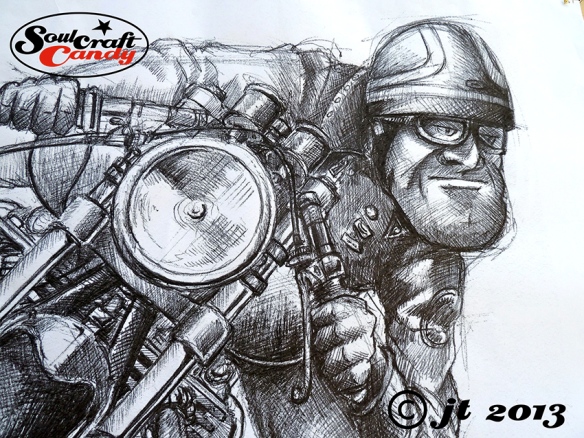 There are some interesting things that spring to mind when I look at it. The jump in scale really shows up the distortion that occurs in the cartoon process, for example, although the riders body is about right, his head is really quite huge. The original sketch was done in biro onto non acid free lining paper which has a really gritty surface, and the way the line breaks up is very prominent in the blown up version and gives the whole thing a lovely looseness. Take a look at the detail shot to see what I mean.

So the question now is, what am I going to do next? I think it splits into two routes. The first one is to find a printing method, onto paper, canvas or vinyl, which will enable me to get one of the finished drawings done at this size. I can see them making great banners, or even applied to the sides of a vehicle in vinyl, though persuading anyone to take them may be harder than I imagine, but it’s worth thinking about. The second is to start to think seriously about how I would create a drawing at this scale, a journey probably riddled with experimentation with different media and tools which could be a lot of fun. Part of that journey has already started with the idea, hatched at the local coffee shop with my good friend Ben as usual, to investigate making a drawing instrument which creates the quality of line shown in the big print. And that is as exciting as actually doing the drawing itself, so I’ll keep you all posted on my travels in the world of large format printing and whether I can figure out how to construct the worlds biggest biro pen.

The sharing of pictures which are completed as gift commissions is always a little tricky. Firstly you need to wait until the gift has actually been given, and secondly as in this case, I was waiting for it to be published on a club website before picking up my small trumpet and giving it a blow.

This depiction of slightly exuberant sidecar piloting was done for the brother in law of a very good and old friend of mine Ben, whose approaching 50th birthday required a special kind of gift. Adrian, the brother in law, is an ardent sidecar enthusiast and is setting out this summer on a european tour on his outfit with his wife Polly. Over a coffee with Ben, we agreed that a speeding outfit with fresh french produce bulging out of all available spaces would be particularly apt.

When undertaking an exercise such as this I like to work from some decent reference material and Ben duly supplied me with some photographs of Adrian, Polly and the big Honda outfit. Whilst one doesn’t want to slavishly depict every detail exactly, a cartoon is an interpretive exercise after all, it’s good to have all the information available for feeding the distortional process which occurs when the pencil hits the paper. I’ll openly admit that my skill in creating facial likeness is not very good, a frequent obstacle in undertaking any commissions, but thankfully in this case I was rather saved by needing to show him riding and so with a helmet on his head. Background information really helps here too as you can pick up little things which you can include in the image which help to flesh out the character you’re trying to show, like the soccer team scarf and riding gear.

The pencil layout before applying the colour washes and ink.

This one was drawn onto Bristol Board before being coloured with watercolour washes and then inked up using technical pens of various widths. I thought it came out really well and was thrilled to hear that Adrian was chuffed to receive such a unique gift.