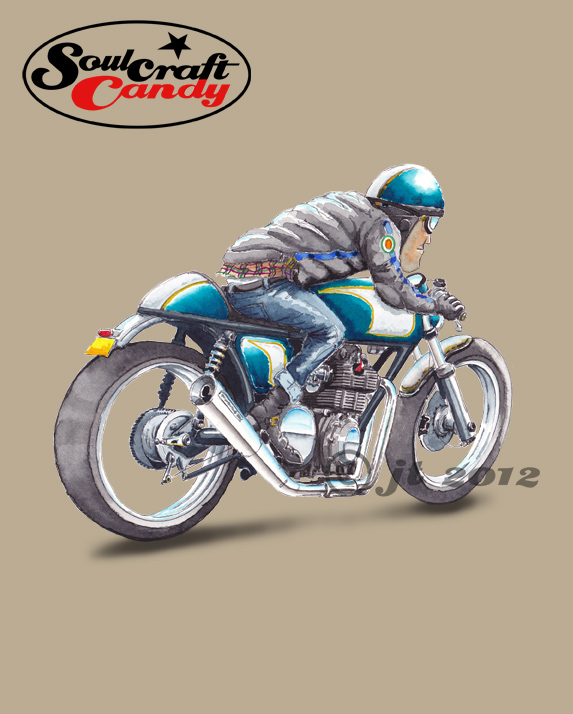 The third version of this sketch is now complete as far as the main subject of the image is concerned. So as not to reduce the exercise to one of exact and complete copying I elected to change a couple of features about the central picture in an effort to try rendering certain details differently as much as to maintain my interest in it. So you’ll see that this time the main body of the engine is made to look black, the bike has taken on a two tone colour scheme and the rider figure has taken to wearing a check shirt amongst other small changes.

Third time around this was still a fun picture to create and the inclusion of a bit more detail in these small areas, such as the shirt material make it much more interesting to look at. It is often said that both God and the Devil live in the details and this is utterly true, ones treatment of detail can make or break a drawing or design, so a cautious approach is always a watch word when trying things like this. Is it successful? I’m not sure that success is the right word to describe it, though I would say that working at a larger scale, this drawing is only six inches wide, would help in depicting the finer points and relieve the need to try achieve things with a very small brush which is still too big.

This buff background arises from necessity as much as choice. I wanted to post the image before departing for a long weekend away so time is short. Some careful trimming of the scanned image and a block fill, with a little shadow, was the solution to time pressures. Judging ones own work is always tricky but in this instance I’d say it works quite well. The colours are suitably contrasty to give the drawing some “pop” and help it stand out. What really ticks the box though is the contrast offered between the very hand made nature of the painted image and the utterly smooth, flat nature of the machine made background. It would be interesting to see how this looks in printed form, something I’ll experiment with later perhaps, and equally, it would be interesting to see what happens when this flat colour is applied by hand using Gouache or Acrylic paints.

There is some black and white pen work which desperately needs attention lavishing on it so messing about with colour may have to take a back seat for a time. The challenge is whether this exercise has committed enough to memory for it all to move forward again the next time I pick up the brush. 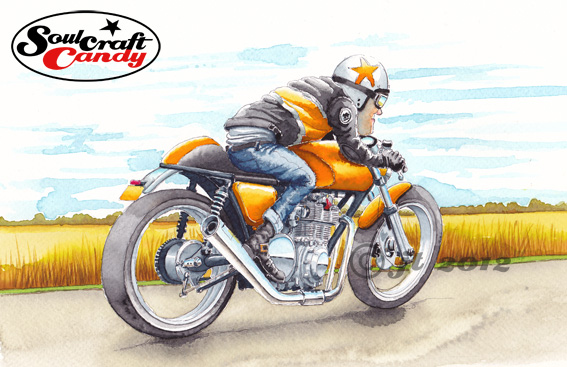 Following the chromatic onslaught of yesterdays post, and those neon bushes, I’m rather hoping that everyones retinas have recovered sufficiently to absorb another blast of colour. Sincerest apologies go out to anyone mildly traumatised by the experience.

Todays featured image is the second attempt at the same picture and it is hopefully less bold than the first, but just as eye catching in its own way. This time around I made a serious effort to take a good look at the first image and learn from it, to analyse as much as address what problems existed. After all, technique isn’t going to get any better without being able to self criticise and understand not just what’s happening, but also to learn to know what to do about it. Without a tutor or associate looking over your shoulder all the time this is not always as easy as it sounds.

This second image took rather longer than the first as paint went down in a much more considered fashion.Firstly the base drawing was tightened up a bit. The rather “dauby” approach of the first is starting to be replaced by a tighter method. When employing wet on wet technique over areas of the picture it is a real skill to be able to control it and achieve the desired level of detail. One has to be confident but not overly so and using a smaller brush helps despite many manuals telling you otherwise. I also elected, and rightly so I think, to limit the creation of all grey areas in only two main colours. Winsor & Newton Payne’s grey, it’s got a lovely blueish hue, for all of the metal parts, and Schmincke Payne’s Grey, much more black in nature, for the tyres, leather and other details. This has  helped give various areas of the picture a more distinct separation than in the first where they are all mixed up. The golden yellow of the bodywork was tricky but worked out OK in the end. It was a deliberate choice to avoid trying to recreate perfect reflections in the tank and panels as I felt this just sucks you into a realm of photorealistic worrying and potentially ends up making the rest of the image look out of place. It’s an honest attempt to achieve a consistent feel across the whole image.

The background resulted from trying a few things out on other sheets of paper and a bit of photoshopping. Again it was about finding something simple that complimented the bike but didn’t overshadow it. I like it, it kind of works, and evokes memories of summer afternoon rides out through the countryside on small deserted roads with only the wind for company.

The third version is already underway and this will be a bit different again. Whether it ends up being any better is up for grabs. Here’s where it stands today. 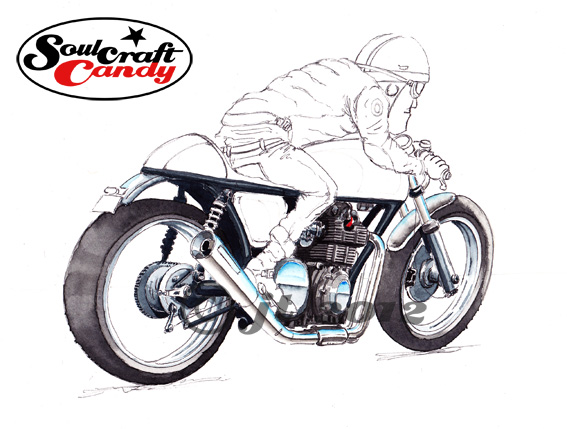 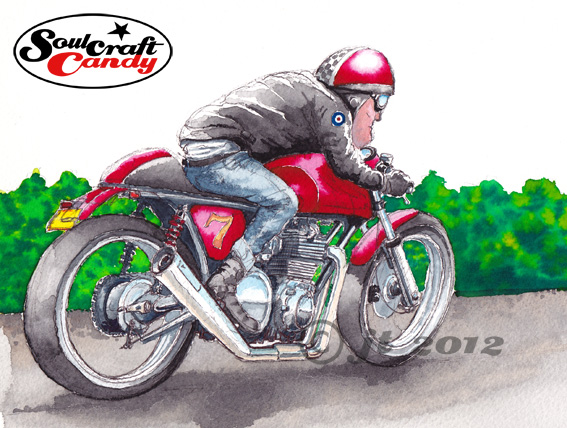 The water colour paints that I have been experimenting with in my recent forays into the world of colour fall into three easily discernible groups. First there are those which come in small block form in a handy painting box. These are what you might call “classic” watercolours and although offering apparently quite vibrant yellows and reds, they are generally rather earthy in nature. The box I have here contains eighteen blocks, quite enough for most things. The second group are in liquid form, like toothpaste, and come in small tubes. My small collection of these covers some Payne’s Greys and some tinting greys of various hues. The third group are those Radiant Liquid Water Colours that look more like inks and come in small bottles with a pipette in the top.

The first and second groups are reasonably easy to get along with although there are moments when certain paints do weird things when applied to certain papers. I’m yet to get to the bottom of that one. The third group, those radiant fellows, are where all the danger lies and one must approach them with some caution. Through their vibrancy they tempt you to get a bit over excited with their application. One finds oneself forever walking a fine line between creating an image with a lovely glow to it, and utterly overdoing it, ending up with a riot of colour that could almost make your eyes bleed.

The “sketch” above, to me anyway, is one such moment when I stepped over that line. Thinking I’d go for a simple vegetative backdrop I piled on the colour like there was no tomorrow. Once I’d started I found I couldn’t stop myself. What was meant to be a rather subdued background ended up being furnished with nuclear powered bushes. The scan almost doesn’t do them justice and I had to go and do something else for a while rather than attempt a sky. It remains without said sky, the white mimicking the grey overcast look of a typical english day. It is stuck to the studio wall now, where it serves as a reminder to take it easy.

I do like the way the bike turned out though, which is what the sketch was all about in the first place. I traced this drawing off on the light box a couple of times so that I could monitor more what I was doing through working on the same picture a number of times. Version 2 will feature in the next post.

Finally, if you are reading this Larry, you can see that I’m using the pictures of your bike to inspire some images. The Honda CB750 is a handsome beast and serves as a great starting point for some future images. There is still work to be done but the process has started and you will be able to follow my progress here on the blog. 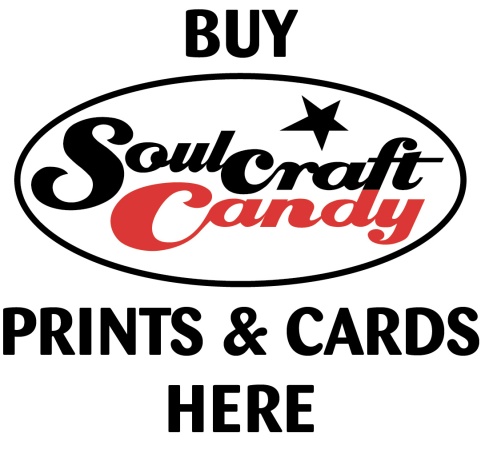