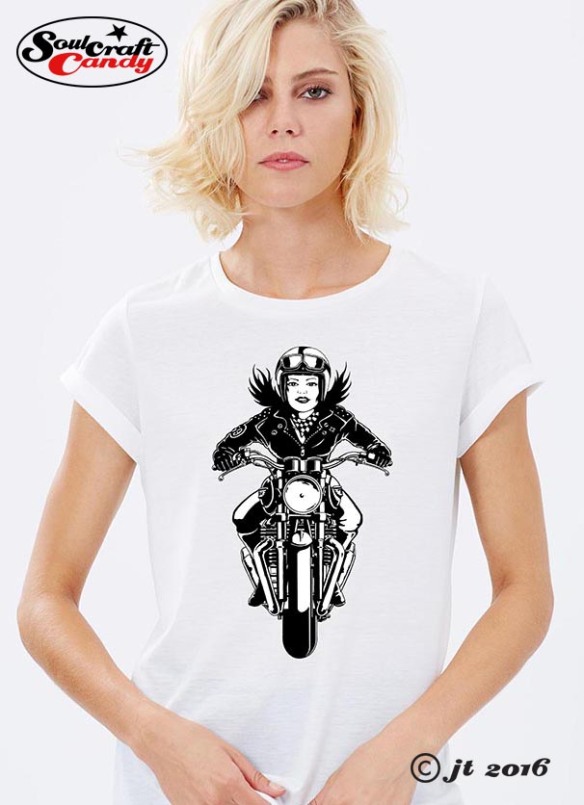 At the time of the last post I’d just sent the second batch of t-shirt ideas over to my contact to see if he would go for any of them. I didn’t have to wait too long this time for a reply, he picked the one shown here. It would be tempting to be a little disappointed with this result after all the work that’s been done, but this is outweighed by the knowledge that I learned a great deal during the process, and have actually ended up with some images that I really like and can do something with in the future.
So, one of the things that I’m going to do is create some hand made prints. This is something that I have wanted to do for a long time. With all these fresh images to now play with it seemed like as good a time as any to have a go. The way the designs have worked out, in very obvious black and white format, they will hopefully lend themselves very easily to a basic printing process.

To be honest with you I haven’t done anything like this for a very long time. Wondering which printing process to try led to lots of questions, the answers to which became self evident quite quickly. There are lots of different approaches to take ranging from the utterly basic to highly involved, simple block printing through to complex etching processes. I plumbed for the simple and settled on having a go with lino cut printing. The last time I dabbled with this process was back at school many years ago, so any learning that I had gained back then was gone and forgotten. Again, another opportunity to learn something new. The shot here shows my starting point. On the left is the design I wanted to transfer onto the lino sheet ready for cutting, on the right is it drawn out onto said lino. I have reversed the image, so that it will print the right way around and started to make some tentative cuts into the surface to create the relief to take the ink. This is as far as I’ve got for now and I’ll update the next steps in a subsequent post.

The final image here is something else entirely. Regular visitors to the blog may remember that back last summer I designed some t-shirts for my local bike shop, Bill Bunn Motorcycles, here in Ealing. It’s great to report that they’ve been selling well and the guys there wear their shirts religiously when working in the shop. I visited there a couple of weeks back only to find that they have undertaken the next steps in their shop refresh and gone and had new front signage made based around the shirt design. I had to take some pictures. They tell me the box signs are back lit, so at night it’s all illuminated which I’m looking forward to seeing sometime soon. I’m immensely chuffed that they have considered the design good enough to take it to this end. A big thanks to them for boosting my confidence and paying my work such a compliment.

As you will have read in the previous post, I have been expending a lot of energy recently learning how to draw women as part of a project to try and produce some designs for t-shirts for women. It has not been as easy as it sounds, and to be honest with you I’m still not sure that I have cracked it, though I feel I’m certainly making progress.

The journey from the collection of sketches to some finished proposals has been a long one involving lots more sketching and redrawing in an effort to get some kind of unifying style working across the various ideas. This process is invariably made all the more challenging by the considerations and resulting constraints that come from thinking clearly through the whole process of how these shirts are made and printed. The quality of the final printed image is reflected in, and can be traced right back to, the quality of the picture you create in the first place. The shirts made from any of the selected images will be screen printed which means I need to aim for crisp line work and clearly defined details.

In the absence of a more detailed brief I decided that I would go forward with a combination of ideas. Firstly I picked two rather obvious ideas based firmly on a girl riding a bike, and then chose a couple of others based around a more emblematic approach. Each one was worked up as an inked drawing to start with, and done as neatly as I could manage. The girls on the bikes were reasonably straight forward to do in a general sense though I was really conscious of introducing something to try and bring some increased movement to the images. I’m not a fan of using speed lines and blurring to do this, my drawing style doesn’t work that well with them, so elected to simply try and show movement by trying to mimic hair blowing in the wind. The second two choices came from trying to approach them more like logos than pictures and incorporating some recognisable cues from the cafe racer scene like chequer pattern and jacket decoration.

Drawing these things is time consuming enough, but tidying up the high resolution scans can be even more so. Again, it’s back to the quality of the image you start with. Screen printers will invariably ask for vector based artworks and so each drawing needs converting from a scanned bitmap image to vectors in a program such as Adobe Illustrator. The software handles this with ease, but you have to ensure that your starting image is as clean, crisp and high contrast as possible. The vectorising process essentially traces your drawing creating paths and fills as it goes. By adjusting various controls in a dialogue box you are able to influence the fidelity with which the software does this task. The cleaner your starting point, the fewer options the process has for including or excluding small elements of the drawing and details. Once the drawings are vectorised though, you can easily include them in more complicated designs in Illustrator, edit them further, or simply use the resultant artwork as it is. If I was more proficient in Illustrator to begin with I might be able to draw these things directly in the program, but sadly my skills aren’t there yet. At least using this approach I end up with both a good quality digital artwork and a nice ink drawing for the portfolio as well. Because the digital images are now editable, one can make limited changes to them if need be, without the need of doing a whole new drawing.

Finally I thought it would be fun to show the ideas as shirts rather than just images on their own. Plundering an image search for white T’s being worn, it was simply a case of pasting the designs into place to lend a degree of realism to the whole thing. I then sent these to my client/contact and began the waiting process. Let’s see what he comes back with.

Writing the first post at the end of an absence is the hardest thing. It’s not about working out where to start per se but, it’s more about avoiding the endless list of excuses as to why this has happened. This is not so much to make my readers feel some kind of sympathy for me, more to do with appeasing my own guilt at having been so neglectful. Ok, that’s the bit about feeling bad done with. There is one big excuse though. 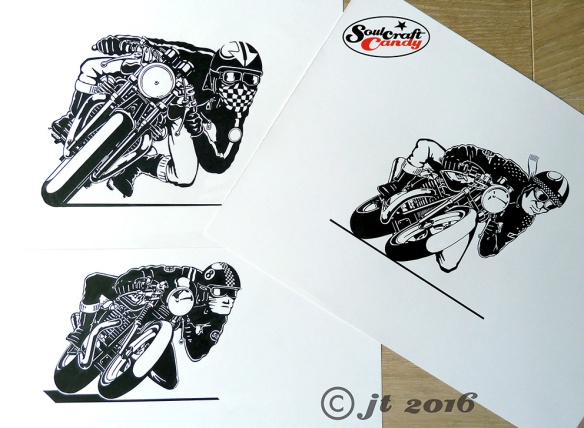 You may have noticed in a couple of the pictures from the last post that I’m standing in front of a rather untidy brick wall. Well, that was the remains of my kitchen and was taken at a time when we had just embarked upon a major overhaul of the house. Various building works to remove some walls, make holes in others and finally fit a new kitchen were already turning our lives upside down. It went on for quite a few weeks. To finish everything off it was down to me, a form of self selected masochistic punishment, to build some big floor to ceiling cupboards, box out the under stair area and fit bookcases, all after redecorating the whole of the ground floor. It took a while and consumed my life until well after Christmas. All done now, until I need to get cracking on the first floor. A smaller project that one.

I was still doing some drawing but not making the effort to blog about it, so I’ll shed some light on what I’ve been up to on that front over the following posts. The photo above is of three black and white reductive ink drawings that were done after doing the t-shirt for my local bike shop (they sell like hot cakes by all accounts, which is good to hear). I have a contact in the US who fancied some designs for shirts of his own, having seen the blog post, so I set out to see what I could rustle up for him. Two of them made it through to printing and can be found in the apparel section of his web shop here, http://carpyscaferacers.com. They look pretty good combined with his type work so I’m hoping they’ll sell well and more work comes of it.

These next two pictures are really to shed some light on my process and show the preliminary sketches I do for these pictures so that you can see where things come from and how they change and develop as I move them through to inking them up. I invariably reach for my favourite blue biro for preliminary sketches, for no other reason than they’re lovely to use and one can achieve such a variety of line weights. This helps hugely when I want to move a line or change details. These are then traced off on the light box, making changes along the way, to give me a base drawing that I can then ink over. It may seem rather a long process, repeating a drawing two or three times but, it’s the best way to get it how you want it. The downside is that this is one of the main reasons why these drawings take so much time.

As before the inking is done with Rotring and Steadler technical pens so that I can maintain as crisp a line quality as possible and there is no ink bleeding on the thin Bristol Board I use. Because the ink is similar to Shelac based Chinese ink, it is very black which is a great help. You don’t have to go over everything twice to get great opacity and it’s just about sturdy enough to cope with tidying up the drawing with a small eraser after you’ve finished. The creation of printable artwork for shirt printing requires these drawings to be scanned and converted to vector paths in a graphics package, so the cleaner and crisper the initial scan the better. I’ll talk more about the whole vectorising thing in a later post.

I hope you like todays pictures and thanks for visiting the blog.