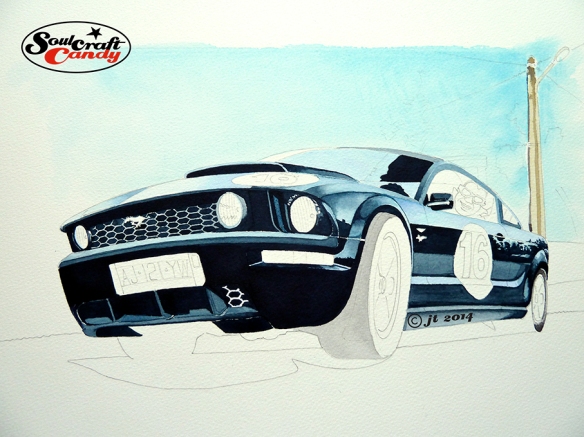 It would be fantastic to say that after only a day of painting that the picture was complete, but I know I don’t work that fast and besides, any faster would be a rush and that’s when mistakes happen. Anyway, as you can see from the shot above it has come a long way from the blue sketch shown in the last post. I suppose at this point the car is about half done.

Barring a couple of small detail changes it was very straightforward to trace off on to the watercolour paper using the lightbox. I use a good old HB pencil for tracing off, and I’ve found that once you’ve captured the image you can then stretch the paper as you would normally and not loose any of the pencil work. This is a really handy discovery and means I can avoid endless hours mucking about with grids and such transferring the drawing on to paper stuck to a big wooden board.

All of us who have been lucky enough to have been on the receiving end of any artistic tuition will have been told at some point or other that there is no such thing as black when making a drawing or a painting. So the first challenge when rendering a black car is working out what colour it is. An old tutor I had at design school always recommended starting with Payne’s Grey and working from there. He’s been proved right so many times. So the picture is built up using various dilutions of Winsor and Newton Payne’s Grey, wash upon wash. This means you can work slowly toward the shade you’re after without putting down a whole load, and subsequently realising it should have been lighter. It’s time consuming, but a lovely technique. To get the slight blueness in the highlights I put a very thin wash of Indigo Blue down first. The bits that look black, but are in fact an intense dark blue, were put down quite thick as those areas had very defined lines to follow. For the area of shadow under the car I’m going to use a half and half mix of W&N Payne’s Grey and Schmincke Payne’s Grey which will give me a slightly warmer shade. I’ll mention here that although I have three tubes of paint here all called Payne’s Grey, from different manufacturers, they are all quite different. It helps to buy a few and find the one that suits your technique the best.

The background contains the concrete telegraph pole shown, and a whole swathe of a large green leafed hedge that sits behind the car in my reference shot. There’s a big tree in there as well so they will go in towards the end of the painting process so that I can build them up gradually and frame the car just enough without swamping it. It’ll be done soon.

I’m currently working my through a small book I bought recently about creativity. Needless to say I find it extremely interesting. The book is called “12 Rules of Creativity” by Michael Atavar, you’ll find it here. In the opening chapter is some stuff about training your eyes to really look at things, to really see what’s in front of you. What’s this got to do with drawing this car? Well, I’ve tried a number of times over the last few months to get this picture underway, and each time I have utterly failed to capture it in any way that was remotely close to what I was looking for. Realising the other day that it would be a good idea to have another go, I thought I’d read that chapter in the book again before picking up the pen. By reading the pages and looking up at some photographs I’d taken of the car on the computer screen, it was suddenly much easier to see what I was looking at and, see in my minds eye the composition of the image I wanted to create. Funny that. I’m not exactly sure how it worked but some connection in the brain suddenly got made, and forms that I’d struggled with previously seemed to be more easily understood. Once I’d established an eye line and got my head around the extreme perspective the sketch progressed fairly quickly, though I did have to have a couple of goes at getting the wheel angle where I wanted it.

Consequently I’m pretty happy with this first drawing, which I’ve done in my favourite blue Bic biro on a very cheap sketch pad. It will go onto the light box next so that it can be traced onto some watercolour paper ready for painting and inking.

Ultimately the picture is going to be a gift for my friend Christophe in France. We will be visiting him next month for a house warming party, so I’m hoping he’ll like it and put it up in the new place. He’s a confirmed petrolhead, and this is him in his beloved Mustang, a car I can only describe as a ballistic tank. 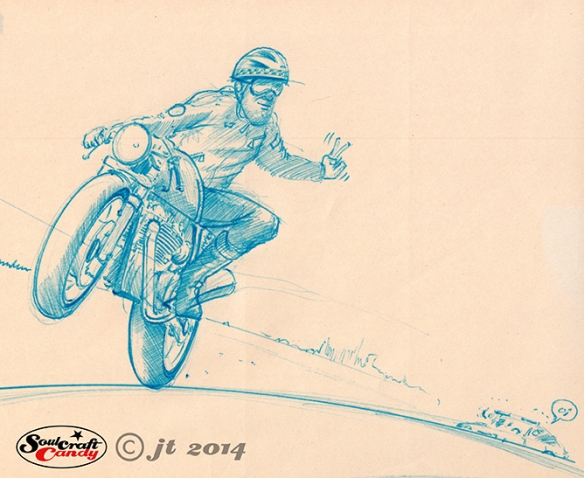 Wow, it’s been two months since the last post!  I don’t for a moment think that that is a good thing but, the time has now passed so there’s little point worrying about it. Summer is always a busy time and this year is no exception, though I would have preferred it if one of the things that’s been happening in the meantime wasn’t the premature termination of my working contract. Hey ho. At least I wasn’t fired, I just became the resultant collateral damage of a major falling out between other parties who couldn’t resolve their differences. Such is the unpredictability of freelance working I suppose, and something that we all have to get used to by necessity rather than choice. As you can imagine, finding the next thing to do is a challenge which drags me away from keeping my blog up to date.

But enough about that. Today the creative itch has finally got the better of me and sketches have been scanned, paper has been stretched and the need to draw is whispering in my ear. So, what am I going to work on next?

Some time ago, far too long to be considered as recently, I was contacted by a guy in California, a certain Mr Steve Carpenter, who has made a very successful business out of building cafe racers for select customers. He wanted to know if we could do something together. I said yes, of course, the guy’s a very respected builder and a very creative chap. I feel rather honoured to be asked, frankly. So my next project is to create some specific artworks for Steve in my black biro style, based around some ideas we’ve talked about.

So here are a couple of initial sketches, done in blue pen on newsheet, which are my first attempts at capturing what Steve and I have chatted about. I think you can get the gist of what we’re thinking from the images. These two are first thoughts and are not yet exactly what I’m after. There are a stack of post-it notes here covered in notes about what I want to change about them, I find this the best way to document my thoughts and satisfy my inner editor, so the final image will be different. But these are a solid start in trying to capture the feeling I’m after and get a feel for the overall “shape” of the picture I want to create. Mr. C knows I do this as a hobby, so he’s not applying any pressure, I’m very capable at doing that myself (!), but looking at these sketches today and reading through the notes makes me want to get on with it and rev up the creative engine again.

It’s good to be back.