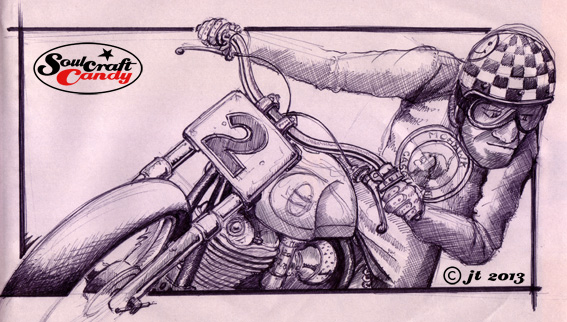 Welcome to the first post of 2013, a new year hopefully full of promise, creativity and unbounded potential for us all. Whilst trying my upmost to remain in a creative mindset over the holiday period, I have to confess I found it monumentally difficult to maintain any momentum. Still, there are some things to show today so the time wasn’t wasted completely.

The small doodles from the previous post have received a goodly amount of attention in their transfer from the sketchbook into the A3 Newsprint pad. Taking them up in scale quickly helps greatly in the process of nailing the views one is after and is a great way of giving the old freehand skills a good work out. The newsprint paper is possessed of a beautiful kind of softness which takes Biro pen really well, and so drawing is both fast and furious, though it has a strange resistance to certain media like chalky pastels. That said, it can withstand a healthy level of abuse for such thin paper. This stage of the process also provides a great opportunity to throw some colour about, just to see how things might work if that’s the chosen way forward. For this I’ve used some very old Caran D’Ache Neocolor pastels that have been with me for years. They don’t crumble like normal oil pastels, so less mess, but they still maintain a fair degree of smudge-ability, so you can blend and overlay the colour. Sat here writing this I’m of a mind to perhaps try them out on a much larger format sometime, once I’ve visited the art shop to get a few more colours that is, currently the small tin holds the remnants of perhaps half a dozen or so. There are quite a few of these little sketches to work up, so more coming in the next post. 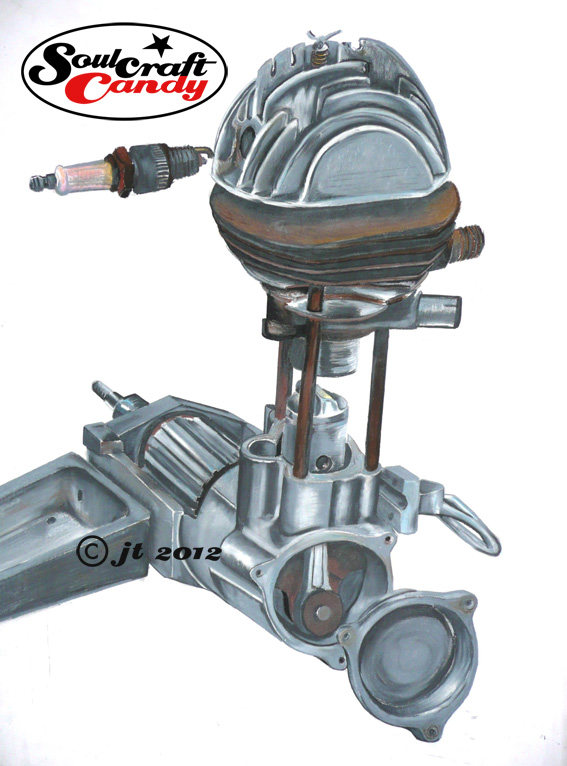 Before getting on to the main purpose of todays post, an update on another of the biro drawings, there is just enough time to show you one more of the Cyclomotor drawings unearthed the other day. As you can see this is a colour one and as far as I can remember it was quite a big one, something like A1. What does remain firmly in the memory is how it was done. My tutor at the time insisted we make some of our drawings in colour and as this was a drawing project brushes were out. I had had a small tin of these oil pastels kicking around at home for a few years but had never used them, so this was a perfect opportunity to give them a try. They are called Neocolour by Caran D’Ache and are quite hard in their consistency. They are not at all appropriate for any kind of detail work but for big jobs they rule. They go down quite evenly for a pastel and what is really nice is that you can smudge them in a very controlled way with your finger and blend the colours into each other with some control. I’m wondering if I can use them for some of these bike drawings if I can get the scale up big enough, could be fun.

Looking at this old drawing today gives me real pleasure. It represents something that I work constantly to rediscover these days, a kind of naive confidence in the way the drawing is made that lies beyond the bounds of the years of formal training that followed this period of my experience. The errors in perspective and construction seem easily carried by the sheer boldness of the enterprise. I still have some of those pastels somewhere, perhaps it’s time to dig them out. 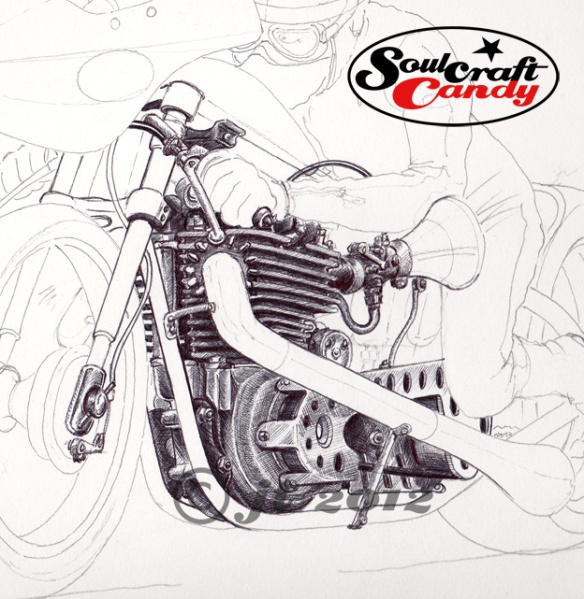 On to the main thrust of the post, oddly a much shorter paragraph, and this is a kind of progress snap shot of the second drag racing picture being worked up in biro. This one is taking a little time as I’m kind of learning as I go. In a break from usual practice this one’s being done on a different paper than usual, Fabriano Drawing Paper, whiter than cartridge with a slightly different texture. It’s a learning exercise as the pen engages with the surface in a softer way which means needing to be much more delicate with any pressure. It also tends to be much harder to hold a crisp line, though having said that it does give shaded areas a looser feel than that achieved with Bristol Board. The big test will be to see how it deals with larger areas of black and the fine feathering used on wheels etc. It is probably better suited to larger drawings where a softer medium can be used like pencil or crayon. I’ll persist though and see how it turns out.

As mentioned before on the blog there are always things going on in the background while work on the larger finished drawings is progressing. Sometimes this takes the form of working sketches which will form the basis of larger works, at other times they are small drawings that are used to practice techniques or develop an idea.

Above are a small group of what are known here as bikeheads. Invariably the larger drawings contain a character or two and it is often a challenge to get them looking right for the given context that they find themselves in. Finding the correct pose and body shape is never simple and the same goes for facial expression, and how this reflects the characters personality. The former are dealt with purely through sketching out varying forms but, the latter is harder, especially when you realise that even the slightest variation in line can change a facial expression completely. So as an aid to get things going I have started a kind of character bank in which to keep all the doodles of heads and faces that appear through the sketch sheets. It will then be easier to have a look through and find some inspiration when it’s needed. Adding some colour to these helps to bring out the character and keeps my colour pencil technique up to scratch too if it’s not being employed elsewhere.

Which leads me neatly onto this second group. Back in December a post contained some small groups of varying bike styles I was playing with at a reduced scale. Those had been completed in crayon and ink. These above were done purely to see what would happen if they were done using liquid inks and watercolours. To find out how intense the colours would be and how much of the detail could be held  given the very liquid nature of the medium and the coarser paper used. Very fine Rotring pen has been applied too, to firm up[ the outlines and add extra black where desired. The paper was fine for the paints but proved to be a bit too “wooly” for the finer stuff subsequently done with the pen. Next up will be a test on harder paper.

Some say you can’t learn to draw from a book. This may be so, or not, but a couple of really useful books I refer to regularly are Action Cartooning by Ben Caldwell, here, and Cartooning The Head & Figure by Jack Hamm, here. Both are invariably out on the desk when character sketching. Neither will teach you a style but, both will inform whatever your personal style may be. Great books.