A slight diversion today as finishing the story of the 250 build is way overdue. So some words and pictures of painted bits, metal bits and a nice piece of leather.

With three coats of base black applied, a series of white stripes were then masked and added. Everything was left for a couple of days to harden up before a very fine rub over with extra fine paper prior to the lacquer going on. For reasons of cost more than anything I’d elected to use rattle can lacquer rather than 2-pack on all parts apart from the fuel tank, which would be treated to a good couple of coats of petrol resistant lacquer, again from a rattle can. In retrospect I wish I’d gone the 2-pack route but it made the whole paint phase way too expensive, the petrol proof stuff works well but has yellowed in places and was quite tricky to apply evenly. With the lacquer all hardened it was time for a good polish and I can’t recommend Autoglym Super Resin Polish enough. Fantastic stuff and everything was just so shiny shiny.

Two important pieces of metalwork remained to be fabricated as all the painted parts made their way onto the bike for the final assembly. I knew the area at the back of the seat needed tidying but hadn’t been able to do much about it without the seat so it was stroke of luck that the seat arrived back just in time from being recovered. The first task was to make a piece to shut off the open area between the new mudguard and the seat mounting assembly. this then wrapped over the seat mount and formed an infill sitting below the rear of the seat base moulding.As before I worked it all out with thin card first which meant I could create a pretty accurate template for marking and cutting the sheet steel which was cut flat and then bent up in the bench vice.

For ages I’d been wondering how to finish off the rear of the seat. Knowing that there would have to be some kind of cover plate didn’t seem enough, there needed to be something else in there to give a more finished look. The answer came to me out cycling one day when I spotted and old bicycle with a little pouch hung from the back of the saddle. I ventured onto the internet to see what I could find for motorcycles. As it turned out, not too much unless I wanted something that looked like it had fallen off the back of John Wayne’s horse, and tassels are definitely not my thing. Taking the bicycle route proved more fruitful and in a fit of extravagance I splashed out on this lovely little number from Brooks the saddle makers. I quickly made up an angle bracket to fix the panel to, mounted to the seat base, and again using some card drew around the profile of the seat and transferred it to another template for cutting. A couple of holes and two slots later I had a neat little cover panel that the pouch straps attached to directly.

With these two new parts painted black final assembly could continue apace, my deadline for borrowing the workshop was looming.

Day two dawned and the first few parts that I’d ordered arrived, crucially the handlebars. Flat and black. The previous evening I’d spent some time wondering about the seat and what I could do. It took my subconscious all night to remind me that in the loft was the old seat from my Speed Triple and that it might, just might, fit. I fetched it out and took it with me along with the bars. First job then was offer the seat up to the mounted petrol tank and frame.

There is a moment at a time like this when your brain seems to be ahead of you somehow. Just the act of walking up to the stripped down machine filled me with a sense that I was onto something here. It’s as if your subconscious has already worked everything out using all of the visual information that your eyes have previously supplied. All bike seats seem to affix in a similar way, a tongue under the nose of the seat fits under a bar in the frame and the rear is then fastened down. I went straight over to the bike, got the seat out of my bag and plonked it on, stood back, raised an eyebrow and put the kettle on. With coffee in hand I returned to see if my luck was in. 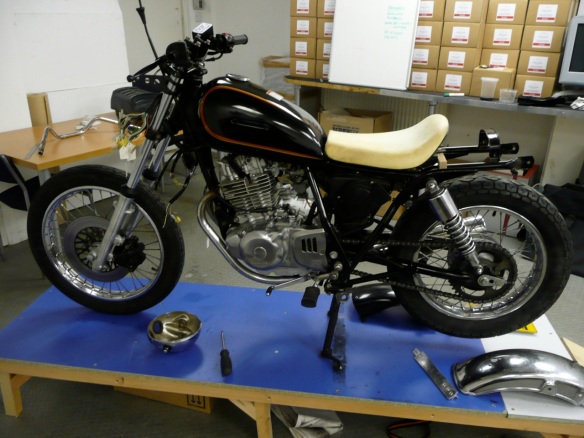 By God, it just sat there looking like it was destined for the job. I removed the old cover material and propped it on some wood for a better look. It was going to work. I’d already spoken to some seat coverers, P&P Seating, and their delivery time was the same as my deadline pretty much so if I sent it off that day for covering I’d get it back pretty much as my build finished. I had to move fast so I needed to make the seat fit before the day was out. The tongue on the front of the Triumph seat is integral with the seat base moulding and was not in the right place, so I cut it off. The Suzuki seat on the other hand had a pressed metal tongue screwed to the seat base, so I removed that too and offered it up to the now trimmed smaller seat. A bit of fiddling and three drilled holes later it was attached to the new seat with three bolts with the nuts sitting snugly under the seat foam. 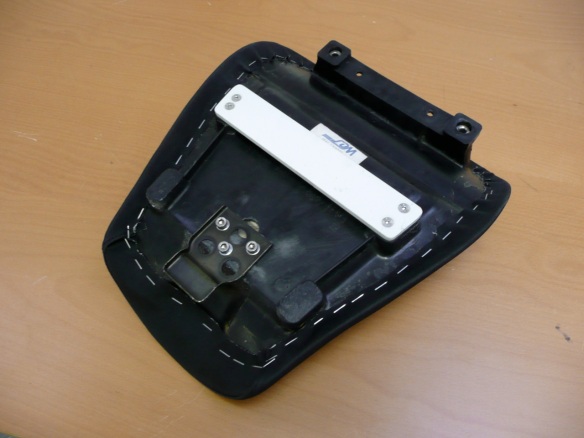 The rear was a bit more awkward but fortune smiled again. The rear bolt holes of the Triumph seat sat directly in line with the mounts for the rear shocks, all I needed was to make a bridging piece mounted to these points to support the rear of the seat. But for now I merely cut a piece of wood as a stand in and gingerly sat on it. The middle of the seat sagged and thus required some support but, again the moulded seat base provided half of the solution. Four moulded bosses protrude from the seat moulding and it was simply a case of putting a packing piece under two of them which would rest firmly on the frame rails below. A bit of scrap 6mm ABS sheet did the job perfectly. Finally I filled the gap between the nose of the seat foam and the tank with a piece of shaped modelling foam and taped it to the original. At the same time I bent some steel strip to form a makeshift rear support to confirm my suspicions and sent it off. I reckoned I could use the newer seat from the Triumph as a reference to check the rear mountings as I went, knowing it would all fit the recovered seat when it came back. Job done, I hoped. 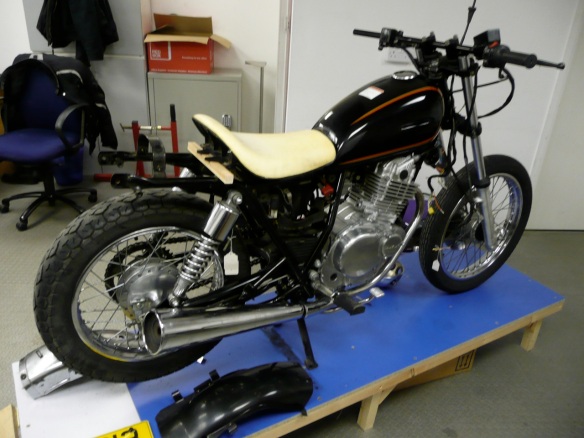 With the new handlebars quickly mounted on the top yoke I could get a fair idea of the stance that I wanted the bike and rider to have. I was feeling quite pleased with myself until I noticed the two huge frame spars sticking out from behind where the seat would mount, an ugly legacy from supporting the original “bench” seat with a welded on cross piece sticking up too. There was no doubt about it, they had to go. I wanted a sleek curving fender there, not a rear end dominated by a couple of girders. A watershed moment approached, the first major modification of the frame and as it turned out, the only one. Now, where to make the cut? Before getting the hacksaw out I wanted to be sure that nothing was going to end up twisting once they were removed. The lateral frame bracing around the rear shock mounts looked pretty sturdy and so these rear rails didn’t seem to perform any other function  than to support the seat.

With some masking tape applied I marked where I wanted to make the cuts and took a moment for a final check. Reassured that all would be fine I sawed straight down through the roots of the spars and part of the surrounding box bracing. Nothing moved, I grinned like an idiot. There is a plastic inner mudflap inserted into the space in front of the rear wheel between the frame rails so I marked and cut that down to size too, giving me a clean approach for mating up the new rear fender. To finish the day I filled the holes in the end of the cut spars with hard body filler and sanded it flush ready for painting.