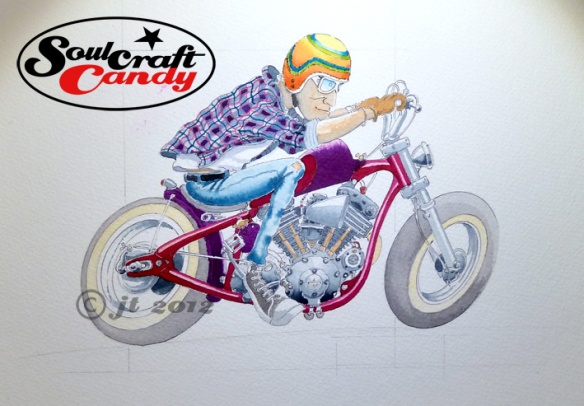 Having decided to be a bit bolder with the colours on this one I’ve pushed the boat out a little. Normally I’m not normally regarded as the worlds most colourful person, my wardrobe is mainly centred around innumerable shades of blue, black, white and the occasional earthy tone. The interior of my house is painted mostly white. Not very flamboyant and there are certain colours I daren’t go near like yellow and green. When I worked as a designer I thought about colour a great deal, there were many lengthy deliberations involved in picking colours for products, details and graphic elements. Nowadays things are different, some years spent not being in control of this aspect of projects has rather reduced my colour confidence and so splashing it about again takes some nerve, but it’s good fun.

Though the drawing may look slightly washed out at this stage I’m hoping that the intensity will return once the black ink starts to go down and I have decided on a colour for the backdrop area behind the central image. This should help to give it some punch, lift it from the background. Current thinking is go fairly neutral in both colour and tone so’s not to clash too much with the bright red frame and the helmet colour. The next post should show how that’s starting to look.