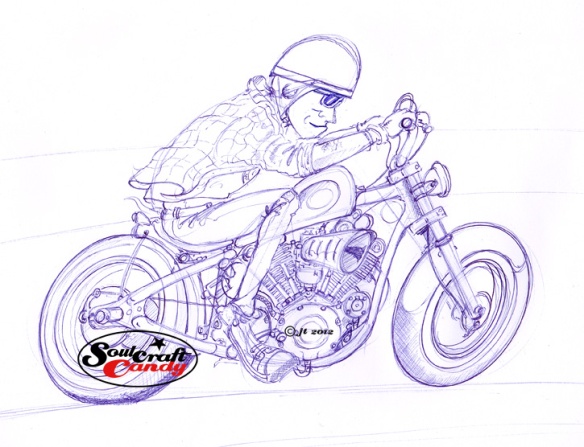 Here are a couple of different sketches today which are inspired by some shots I took at the drag meet of some great custom street bikes that were on display there. I have been meaning to try and have a crack at some V-twin powered creations for absolutely ages.

You could be forgiven for thinking that this engine configuration is utterly ubiquitous given that it seems to lie at the heart of so many custom motorcycles the world over. You only have to open the pages of any custom bike magazine and they are everywhere, such is their popularity. But for some reason I have persistently shied away from them. At first it was very much a case of their apparent simplicity being incredibly difficult to capture in perspective views and, secondly it was just a case of never being able to get the proportions right, no matter how hard I tried. In fact the harder I tried, the worse it became. Anyway, as you can see, some progress is being made. Like lots of these things you have to force yourself to start but, once that initial hurdle of confidence is overcome the path to familiarity is more open and you can get on with the task of learning what you need to create the image you desire. It’s that old embedded knowledge process again and that apparent ubiquity plays into my hands here as there is never any shortage of reference material to help me out when I can’t quite get it right.

Starting with some Bobber type street bikes, I have a soft spot for these, the sketch at the top is mostly about getting to know some proportional stuff in elevation, which is really the starting point for being able to distort and exaggerate details in future drawings. The lower drawing is a first stab at pumping up the engine proportions in a simple perspective view. Again, it’s early days but satisfying none the less to be finally adding this format to the engine room.