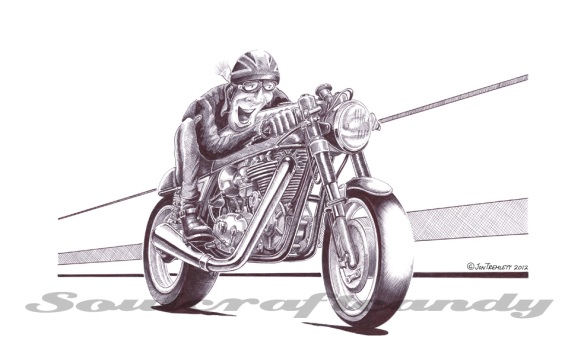 Hot off the press comes the first finished drawing from the Cafe racer series.

Having made the decision to work on a series of drawings, all connected by a core theme, there is a kind of flow starting to emerge during the process which has not necessarily been present before. Previously the completion of any drawing was quickly followed by the question of which sketch to pick up next and move forward. Despite working on several drawings concurrently it was always there in the background and served as a persistent distraction.

With a number of preparatory sketches clinging to the wall of the studio room an order is establishing itself as to what’s coming up next and this leaves the mind free of constantly needing to think of new ideas all the time. Focusing on concentrated idea generation sessions and then working through a series feels quite liberating in a way. It’s a much more methodical way of working as opposed to the rather scatter gun approach of before.

It is an inescapable truth that none of us work in the same way. Part of the journey that this blog hopes to chart is that bit which concerns finding the way of working, the methodology if you like, that best suits what I’m doing. It goes beyond being systematic purely for systematic’s sake. The world is ridden with systems and creative activities are no exception. If you ask any other creative person what the best way of working is, they will invariably enlighten you to their preferred ways of working. This is not a bad thing in itself but in most cases it’s the way that works best for them. The key is listening to their comments and adjusting your own approach incorporating those points you want to include. What you decide upon is never set in stone, and in fact should be able to evolve as you and your skills do. It should be all part of the fun, so if it’s not working, change it.

Finally, why cafe racers? In brief there are a couple of reasons that stand out from the field. The first is that to me they represent a very elemental form of machine. Simple, uncluttered and encompassing a purity of purpose which appeals to my sense of form and function being in balance. The second is perhaps a bit more romantic in nature. These machines in a way signal the birth of personal customisation in its purest form. English cafe racers and american bobbers could be said to be the first street specials of the post war era and as such are now the bedrock of all subsequent modifying styles from diggers to streetfighters, and choppers to street trackers. It’s a style that has endured and continues to do so. This is my way of celebrating that. The fact that I live only about three miles from the original Ace Cafe might have something to do with it too.

A short foot note. This drawing is going to be submitted for a public art show here in Ealing at the end of March. It may even be for sale, in which case it could be a first if it finds a happy owner. Fingers crossed.