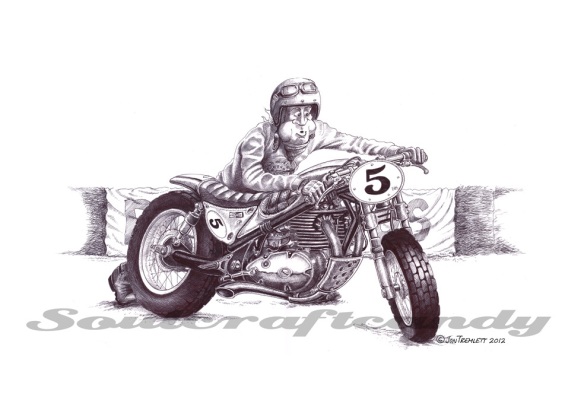 Ok, so this one doesn’t fit into the cafe racer series but, it’s been with me for a while, slowly reaching completion and falling conveniently into the category of “ work needing to be finished. It’s called “Paddock Push”.

The inspiration for it came from a few different angles. Throughout the history of bike sport there have always been instances of intrepid individuals wrestling moderately inappropriate machinery around Off Road. Massive BMW’s careering across the Sahara in the Paris Dakar, Harley Davidsons pounding around the Catalina Grand Prix and overweight Brit engined motocrossers ripping up the fields of England. Wherever there are lightweights, one will find the heavyweights somewhere in the background.

This is not necessarily a homage to these feats of derring-do, however I am drawn to the thought of the unlikely hero, the underdog. The choice was to create one in full flight and one in a more static situation. The first to be complete is the latter, where the apparent grace and power of a big machine in motion is replaced by the struggle to man-handle the thing around when the engine has finished doing what it does best. If you’ve ever moved a heavy machine around on a loose surface you’ll understand why the guy is huffing and puffing.

The next cafe racer picture is nearly done. Watch this space.