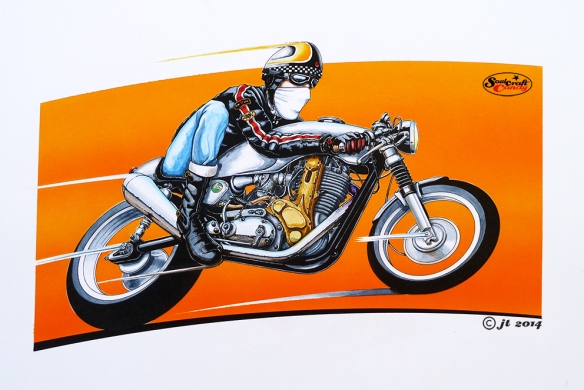 Those little thieves, that like to pinch bits of your time when you’re not looking are still hovering around the studio, turning hours into minutes. I’m experimenting with various strategies to combat their fiddling, the most effective so far being to shut down the email at certain times and turn the phone to silent mode. It’s working but it’s not a long term solution.

Despite these distractions I have finally managed to finish the picture featured in the last post, and it would be fair to say that I’m pretty pleased with how it turned out. For a long time I wondered if the speed streaks would work, and was tempted on many an occasion to just leave them out. I’m glad I didn’t, they add a bit of direction and dynamism to the image which wouldn’t be there otherwise. It’s a detail I need to work on to get absolutely right but for a first attempt it’s none too shabby. I’m also very happy with the balance, between cartoon and reality, I have managed to strike. It is such an overwhelming temptation sometimes to get utterly carried away in the painting and start working too much realism into the colouring.

As for that background, well it just needed something massive and punchy to lift it off the paper and grab the eyeballs. I did it in Dr. Martin’s liquid water colour with an airbrush, using two variations on orange. First a layer of orange and then some tangerine layed over the top. I always find using the airbrush completely nerve wracking. Laying down the masking film is enough to give me the jitters on its own, and then cutting out the mask with a scalpel and removing the pieces turns me into a shaking wreck! Spraying seems to be the easy bit. The ink takes ages to dry properly and in the end I had to remove it from the surface of the film with a carefully placed piece of blotting paper and a roller. Only then is it safe to remove the mask, very, very slowly.

As I mentioned before, I think I’ll leave this level of detail painting for a while and have a go at being a bit looser with things. I’ve been sketching out some other pieces in good old fashioned pencil this week and I want to take one of those onto a suitable paper and play with washes. I’m hoping it will be a bit experimental and free up the brain a bit, loosen the creative muscle as it were. I’ll let you know how I get on.