It is the weekend and what better way to celebrate a couple of days free from the grind of the working week than to post a double helping from the Soulcraftcandy studio. This first one is called “French Cafe”, for obvious reasons, though it was not my original intent to make a specific gallic reference when applying the colours, which I attempted to limit the number of. Perhaps it’s because I was thinking about our friends Veronique and Chris whom we are visiting in Bordeaux in April, who knows.

I don’t seem to be able to stop myself from drawing these old style rocker guys, I’m not sure exactly why. That said I’ve always admired the paired down nature of the bikes and the almost iconic look of the guys who ride them. As well as the structural and visual appeal there is also some emotional appeal too. Some might consider the whole scene a little hackneyed these days but this can not deny the fact that it has endured, and so remains a rich source of inspiration. 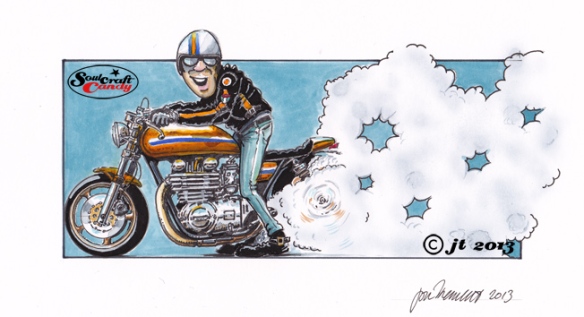 The second image is slightly different. During the idea churning sessions it became clear that certain groups and themes were emerging, large amounts of smoke was one of them. The dynamism of a smoking tyre is a unique thing but in my experience quite difficult to capture, I have pretty much failed on all previous occasions. Now seemed like a good time to try once again to get some proficiency in their rendering. The shading on this one was attempted with an airbrush and only partially succeeds, the rest I’m happy with and I like the idea that the front wheel is somehow prevented from moving by the line of the boundary box. It’s called simply “Burnout”.