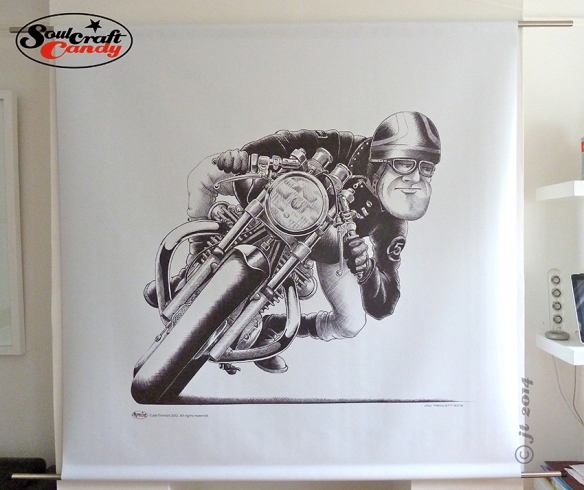 Another project that has spent many a month in the pipeline is the continuation of an experiment I started last year, where I wanted to see what impact it would have if I blew up one of the drawings to something like life size. While I’m still very much trying to figure out a way of being able to draw at this scale, it seemed like a good idea to get something printed in order to be in the position to make some judgements about how to approach such a challenge in the future. Initially I’d enlisted the help of a good friend, an architect with a big format plotter, to run out a couple of A0 sized sheets with the sketch image of the above drawing on. Taped together, these looked pretty impressive though the paper wasn’t too keen on staying very flat for long. Follow this link to that particular post.

After some further investigation, and with one eye on the possibility that I could use such prints for other purposes, it became clear that the best thing to do was get something printed on vinyl as a kind of banner. So this is what you see above, hanging in my dining room. It’s a metre and a half square, roughly 60 inches across and high, and is a thing of beauty, even though I say so myself. Well, I would, wouldn’t I ?

The jump up to such a scale causes you to regard the image in a very different way. The first is that it challenges your perceptions in that one hardly ever sees a cartoon at this size, so one is confronted by a strangely proportioned interpretation of a man and his machine. Some things fit and others don’t. The other change is that the print doesn’t hold any of the information in it back. Every single mark, line and cross hatch is revealed in all its glory, and so what appears a very neat drawing at normal size takes on a looser and more sketchy feel. As the creator, this change is not unlike revealing ones inner secrets of technique and skill to the viewer. Letting them see every stroke of then pen, every guiding thought and inevitably, every mistake. All unexpectedly liberating to see everything laid bare in this fashion. The good thing is, though I may stand to be corrected by others, that the drawing doesn’t suffer for this jump up in size in my mind, it still looks like a drawing, just a very big one done with a very big pen.

I’ve resolved to have some more of these prints done, and it would be really interesting to see what happens to one or two of the colour drawings. To see how every small daub of paint is shown in minute detail. The main challenge will be choosing which one to reproduce. Some would suggest that a painting should never be enlarged beyond its original size but, we do this to photographs so why not something made by hand?

Before I go I’d just like to mention that although vinyl banner printing is a widely available service, it pays dividends to find a printer one can talk things through with before placing the order. So many companies offer a web based service and instant file upload facility, but it’s the ability to see what your final print will look like where many fall short. Luckily I found one who did, so I’ll be visiting them again. If you need to know who they are please contact me.