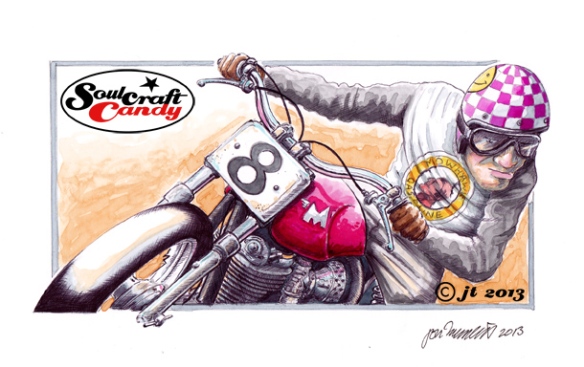 Here’s the picture from the previous post all inked up and finished. This is as far as I want to take it. In contrast to the previous version of this picture, the one with the yellow fuel tank, this one was done with a black biro pen, I was interested to see the difference, and it works quite well though I have to admit to preferring the much blacker lines of the previous version. A good experiment to try though, and for me validates the decision to push the slightly more cartoony style on these smaller pictures. Because biro pen has the ability to give such a variety of line weight and density it’s always tempting, and indeed a struggle sometimes not, to get all carried away with layer upon layer of shadowing and tone which confuses the drawing. The stark simple lines created using the technical pens work well with the colouration to keep the drawing in cartoon territory which is what I’m after with these. It is also helping me get over my biro addiction.

Of course it would be a simple case of going over everything a bit more with the pen to blacken things up but the essence of the picture is already there in my mind, and that would simply look like trying to emulate one kind of rendering style with another. You’ll notice that the boundary box is grey rather than black in an effort to bring a bit of softness to the holding device as well. There are some grey pens here which I’ll experiment with to try and find my ideal solution. So, I hope you enjoyed seeing this one finally. On to the next one. More again soon.