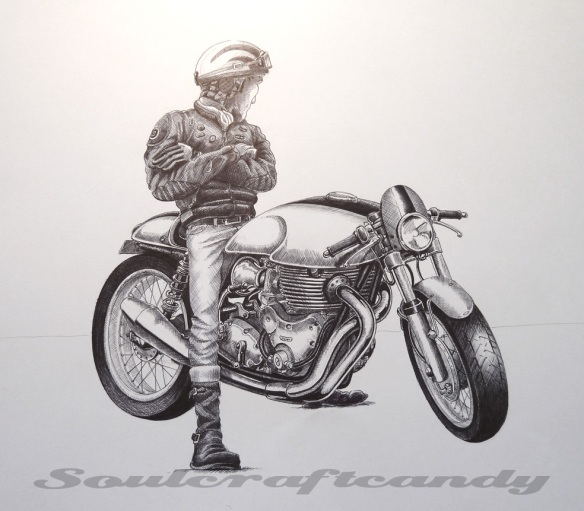 It’s coming, it’s coming, although the anticipated sprint to the finish has somehow turned into a bit of a crawl. The third in the Cafe Racer series is nearing completion, though today my normal creative enthusiasm has seemingly been replaced by a dogged determination. A flowing ease has turned into a plodding grind, but ink is still hitting the paper at least.

Self imposed deadlines are often so hard to stick to, particularly when an images’ creation proves either problematic or the composition remains in flux, and such is the case in this instance. I wonder if this is down to a mood thing or whether I’ve just spent too long noodling away at it. The latter seems a more likely culprit.

What’s interesting about this, to me anyway, is that it occurred to me the other day whilst standing back and having a look at the image, that there is something out of balance with it. Like there was something not quite right going on. It took a while to work out and feels like a kind of line is being crossed, a line that stands between realism and caricature. It has always been a desire to err towards the latter of these two elements but, at the same time maintain a degree of detail borrowed from the real world. In this case, through injecting a high level of detail I have left an element of the caricature behind and the drawing has lost a certain character as a result. Personally I blame the rider figure, he made me do it. Whilst I’m perfectly happy with the way the bike is rendered and the overall impact of the image, some of the quirkiness and humour that should be there has wandered off somewhere. The rider figure is the key, he’s too lifelike. Not by much, but by enough to make a difference and this has been the reason behind my somewhat lazy approach to finishing it.

But it’s only by working through these problems that we learn and progress, so the push is now on to “ship” the final drawing. Below is where things are currently with the background. A simple horizon and mid-ground which places our rider at the side of the road while he awaits the arrival of his mates who are in the distance charging over the brow of the hill. Hoping to have it done very soon, I want to get on with the others as soon as possible.

Please excuse the darkness of the pictures in this post, it’s one of the perennial handicaps of snapping off a few shots of the drawing board only illuminated by the studio window.