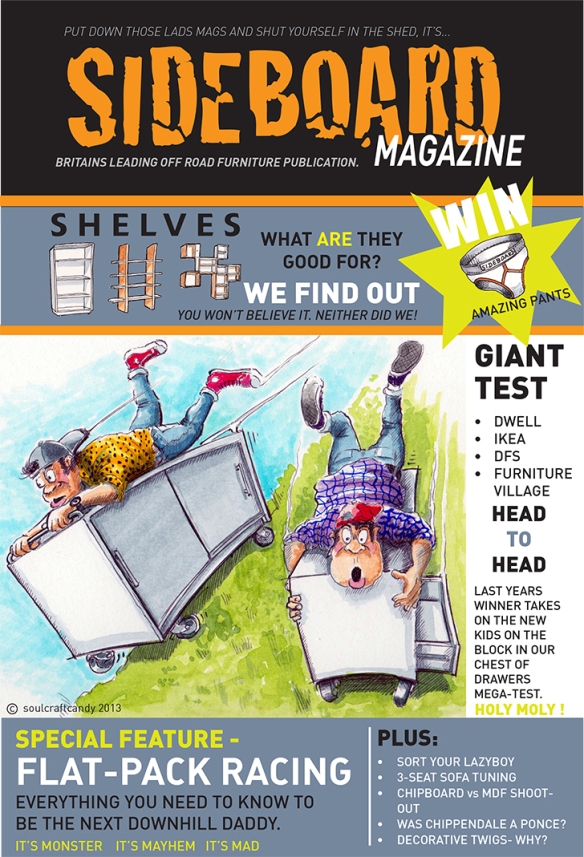 Capturing ideas at the precise moment they occur is always a little tricky. It is not unusual for them to crop up at times when one is nowhere near a pen and paper (another great reason for always carrying a sketchbook with you, a habit I’m very slack at perfecting) or you’re in the middle of doing something else and perhaps don’t have the time to scribble it down. The mad dash home, where one can make a note of it before it disappears into the ether, invariably finds me repeating it to myself over and over in an effort to somehow embed it into my memory. It’s often like trying to remember the details of a dream.

This image above is the result of one such occasion and having sketched it out upon returning to base, I stuck it on the wall from where it has been shouting at me ever since. A discussion over a pint of beer in a pub with a good friend turned to imagining a series of rather ridiculous magazine titles. Based on a number of publications we both read regularly, it seemed appropriate to take inspiration from them, and within a short space of time we’d spun off into a nonsensical world. This one stems from our goofing about with Sideburn magazine, a fine publication devoted to the celebration of flat-track racing and the burgeoning new custom bike scene spreading across the motorcycling world. It’s a great read and the product of a lot of hard work put in by the guys who put it together, Gary Inman and Ben Part. I’d like to stress that this tongue in cheek spoof is in no way meant to denigrate the fine work that the guys do.

At first I was rather reluctant to take it beyond a very rough sketch on some newsprint paper, but as I said, it nagged and nagged at me, so finally I caved in and decided to make it a bit more finished. Usefully it got me using a couple of bits of software that I haven’t touched for a while, so it was a gentle skills refresher too.

Whether its humour survives the major test of sharing the joke with others remains to be seen. The important thing is that it’s now done and the itch has been scratched, so to speak. It is likely that some of the other ideas in this group will find the light of day at some point, but not quite yet, I’ve got some other things I want to get underway first.

One thought on “Beer fuelled silliness.”