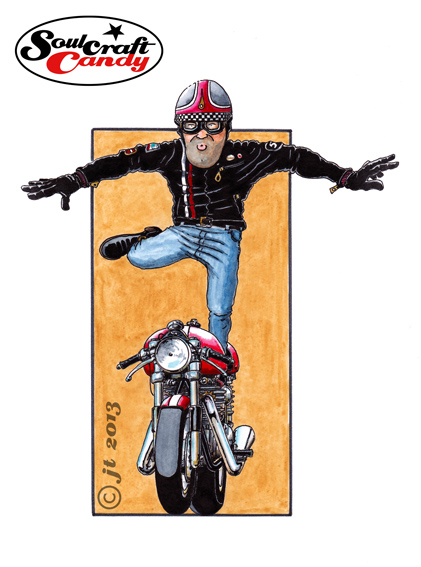 So let’s hear it for No.9, the last one in the series and called Triumph Wings. Try as hard as I might, it wasn’t really possible to complete the group without doing one with a standing figure and in portrait format. I’ve mentioned before wanting to have nine of these pictures for a reason, and that reason is that I wanted to subsequently see what they would look like arranged in a 3×3 grid as a single image. At least with this one I know where it will go in the grid, in the centre as it’s the only one in portrait. Putting that collective image together, in Photoshop most likely, won’t be easy as there are all slightly different in aspect ratio so turning them all into some kind of square format will need some thinking about.

This one was a bit more tricky than some of the others, I had to redraw the figure a few times to get the posture how I wanted it, and there was more than one moment spent standing in front of a mirror with one leg stuck out trying to figure out the way denim jeans fold in that posture. The things we do for our art eh? The bike proved far simpler, being a head on view and so fairly light on detail.

The plan now is to have a small number of these printed as cards and offer the collection through the Soulcraftcandy store. That will be very soon so I’ll let you know the minute they are available, it will be soon. Watch this space.