“Do you draw anything other than bikey stuff?”

It’s an often asked question and the answer is, yes I do. Currently the focus is very much on the bike stuff but, there is increasing feeling that a bit of diversity wouldn’t go amiss every now and then. Looking back through the admittedly rather scant archive here serves as a constant reminder that other subjects do indeed come under the Soulcraftcandy spotlight every so often.

Admittedly it’s not very frequently but, now and again I am asked to do a small commission, or an upcoming event such as a birthday prompts the creation of something different. Providing there is enough time to get things done, including coming up with the right idea, doing small commissions and gifts can be a lot of fun and very rewarding. Not being a pro artist or illustrator means that engaging in these things is less pressured and remains fun.

Peoples reactions to them are often very positive and complimentary. If you are lucky enough and they are giving you some money in exchange for your labours, then usually this more than compensates for the ocassional hour or two you’ve spent burning the midnight oil to get it done in time. The rewards are also emotional, they feel good about receiving something unique, and you get a big buzz out of that and receiving the compliment. Lots of great Karma is shared.

So here are a couple of things retrieved from the archive which aren’t focused on big bikes, blokes and big engines. The one above was done some years ago for a charity auction. A very old friend, who ran a gallery at the time, asked a number of people she knew to donate or create a work to be sold at an auction to raise money for a charitable cause. If my memory serves me correctly it was called The Yellow Brick Road Foundation, a children’s charity, hence the subject of the picture. I don’t remember how much it raised, but it was very satisfying to know that it sold and the proceeds went to a good cause. 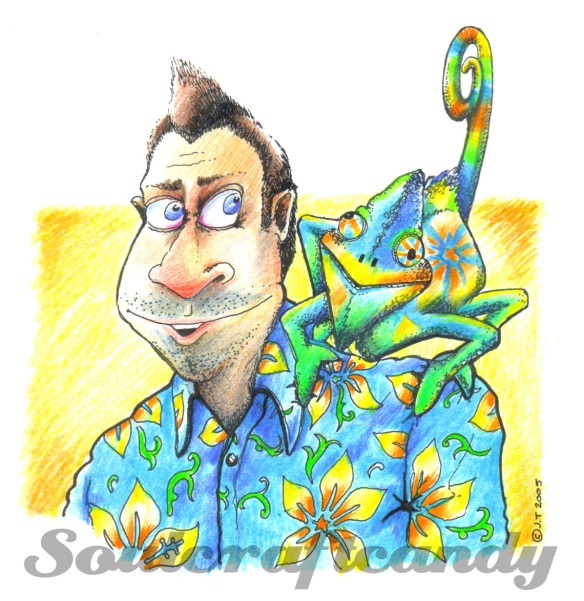 This second image is one of a number done over the years for my brother who runs a veterinary practice and likes to create a new brochure every now and again. Once the images have been scanned for printing he has them framed and placed around the surgery to add bit of light hearted interest to the place. It’s a nice touch and pleasing to know that many others get to enjoy the pictures on their visits. Here I was making a comment about the old adage that owners sometimes look like their pets, and vice versa.

If the archive is holding any other nuggets these will be posted too in the name of variety, which is the spice of life after all.

Both of the above were created using colour pencils and ink on cartridge paper, which was  pretty much my default setting for many years and remains a strong favourite.