Strange effects courtesy of the scanner.

Prompted by my lovely niece Rose, who’s currently away in Germany on a working year for her language degree, todays post has some drawings in it. She quite rightly let me know that all the bike building stuff is all very well but, where are all the sketches etc that filled the blog when it started? I suppose I had got a bit engrossed in the bike build so, for Rose and all other fans of them here are a couple of drawings.

You will remember from previous posts that I was having trouble deciding on backgrounds for some of the images, I still am, it’s definitely becoming a work in progress though my inner self wishes I would just get on and resolve it once and for all. The reasons I’m posting this sketch are two-fold. Firstly I wanted to see how one of the drawings would turn out if I employed an old technique that I haven’t used for ages. Namely inking in the sketch with a very fine tipped felt pen and then gently “washing” over selected areas with a damp brush to create the shading I wanted. I was working just on some thin layout paper as this was a bit of an experiment. I had a feeling that the paper would warp with the moisture from the brush, but I ignored it. Then I put it in the scanner and this is the result, a kind of sunburst pattern around the drawing. I understand that it’s the result of how the light from the scanner falls and moves across the paper, but it’s a pleasant surprise that it creates this effect around the drawing but not across it. Interesting. Backgrounds by mistake, perhaps there is something in this, leaving things to a kind of creative serendipity. 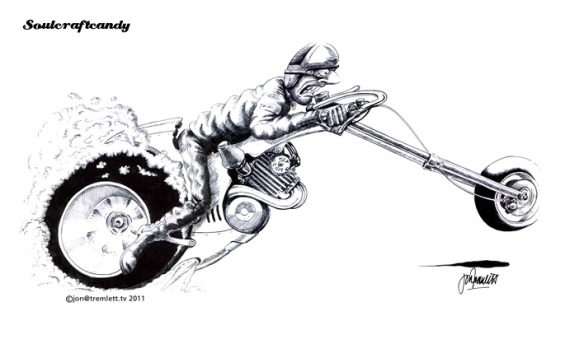 This other drawing is one that I did a little while ago. Again, my sharing this one with you is to do with background again. here I tried to follow up on the idea that I create a partial background using a distinct part of the drawing, namely the smoke billowing out around the rear tyre. I’m not sure that it works that well as I don’t think I rendered the smoke particularly competently. It’s an idea I want to try again. I think I overdid the level of detail in the puffiness of the smoke, perhaps a simpler approach would work better. I do like however the way you can leave holes in the smog through which one can see parts of the bike and wheel. The only drawback to this is that it’s a lot of work to create a drawing that in the end doesn’t work. But that’s half the fun is it not, and we have to do these things in order to learn and move things forward.

So if we believe that we should try and learn something new every day, then today I’ve learned not to leave such big gaps between my sketch posts and that my funny old scanner has the capacity for unexpected creativity. Who would have thought it?