Now on to more important things. In the last build post I’d got as far as making a drawing of how I wanted to mount my new clocks. Conveniently the old clock assembly mounted to the front of the bike via two stout mounts on the front of the top triple clamp, so I decided I would use those for the new assembly as it was a quick and simple solution. With the plate marked out on to some 3mm Aluminium sheet I cut it out with a jigsaw and used hand files to clean up the shape. While it was still flat I drilled all the holes I needed for mounting the clocks and threading the associated wiring. I wanted the holes to be as small as possible so elected to complete the wiring after the clocks were mounted. Not the best solution should anything go wrong in future but I thought I could cross that bridge should it ever arise and, I wanted to decrease the risk of water getting in there as much as possible. This is the UK after all and the bike is for year round use, not just for sunny days. The last task on the plate was to bend it so that it sat at an angle when mounted, presenting me with an easy view of the dials when riding. The jaws of the bench vice were too narrow so I clamped the plate between two sturdy bits of wood on the edge of the workbench and reached for a soft hammer and a drift/dolly, again a piece of wood, and slowly worked my way along the bend until I’d got the angle I wanted, very satisfying. 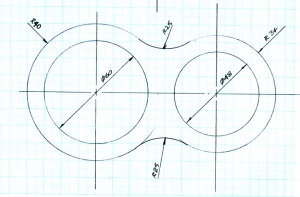 When I got the clocks I realised I couldn’t make big enough clamps to go around their bodies, so the plate mount came about. The problem was that I didn’t want them looking like they were just stuck onto the face of the plate, they needed something to complete the look. For a long time I’ve been a fan of the way that instruments are mounted on race bikes with some kind of foam surround for cushioning. If I could concoct something like that then I’d be happy. Measuring the clock depth from the face of the plate gave me about 50mm of clock to cover in some way. A job I’d done at the workshop some time previously had involved making seat squabs out of a wonderful material called Zotefoam, which is a closed cell polyurethane foam that’s often used for shaped packaging inserts. I found an old off-cut from one of the seat pieces and it was exactly 50mm thick and black too.

As the clocks were quite close together I decided to try and make a single piece that would cover both in one go. It was also evident that the bezels on the top of the clocks would act to clamp the foam in place once the clocks were mounted to the plate, so no glueing or other fixing needed. It all made sense to me but cutting and shaping the foam proved a lot more difficult than I’d imagined. It took me three attempts to get it right. Roughing out the shape on the bandsaw was difficult enough but that gave me a very wooly finish. This problem repeated itself in the two holes also as I’d had to hand cut them to start with using a thin hacksaw blade. I reckoned I could sand the cut areas to get the right size and finish but trying it by hand just made a mess of it as I couldn’t control things enough. With no other options I knocked up a bobbin sander for the drill, a cylinder of wood with some abrasive paper glued to it, and very gently tried to smooth the surface. I used quite coarse paper as too fine and it just melted the surface rather than removing material. It required a great deal of patience. If you go too fast or use too much pressure the foam melts and you end up with big blobs of melted material stuck to your work piece or it goes completely out of shape. That’s why it took me three attempts, but fate rewards the patient.

I was, and still am, pleased with the result. Mounting the resultant piece on the bike it was plain that I would need to take care when fitting the headlamp as the ability of the tachometer and speedo drive cables to bend is not as great as one might think. I cut a small slit in the foam so that it would fit over the odometer knob on the speedo and started to prepare all the wires for attachment into the wiring loom, or more accurately for inclusion in the birds nest of wires that seems to occupy the headlight shell of all bikes of a certain age and type.

Completing the wiring was actually quite simple. It was simply a case of removing the connector block from the old clock wiring and matching the wires to the new wires that exited the back of the new ones. The only fly in the ointment was that the single orange turn signal lamp would not take a feed from the left hand indicator circuit. Undeterred, as I couldn’t get it to work no matter what I tried, I resolved to use what would have been a redundant red oil pressure lamp for the feed from the left turn circuit. It worked a treat and now the orange lamp flashes when I turn right and a red one flashes when I turn left. You might wonder why I bothered with turn signals at all, but I’ll tell you that when biking around London I find you need all the help you can get if it’s a case of showing other road users what you’re doing, so it’s a safety consideration more than anything else. Dull but true. What’s next?