In my last post I mentioned that I wanted to work up those two BMW inspired sketches in ink as a next step before playing around with some colour. Well, things as ever never go according to even the simplest of plans. Not through anything going wrong, far from it, but from being led up another path by my inquisitiveness.

When I’m playing about with colour on an image I’m always fearful of making a mess of it and spoiling a perfectly good drawing through the inappropriate application of paint or crayon. The latter you can sometimes remove with an eraser but, the former is a more tricky medium to shift. It always leaves a stain at the very least. So my thinking was that to avoid such situations I could print the sketch onto another sheet and play about with that. I’ve tried this before and it’s always been onto standard cartridge or stock printer paper. It’s a habit carried over from doing coloured design renderings back in the studio many moons ago, before anyone thought an Apple mac might be useful and anyone had any idea about Photoshop. The copier was my best friend.

My problem, or what I perceived as a problem was that I wanted to use some watercolours and these do not sit well with standard printer paper. The paint goes all streaky and the paper quickly starts to look like an unpressed shirt. I’d never thought to try printing onto watercolour paper as I’d always thought it would be too thick to go through my old Epson. How wrong I was. After a couple of false starts as the paper feeder got to grips with what must have felt like someone feeding it a doormat, it chugged through and the results are pleasing enough to warrant throwing some colour at it. As you can see from the picture above it’s not too shabby a result. I’ve printed out a couple of other scanned pencil sketches in the same way and I’ll pop those up on the blog as they come together and I get to grips with re-familiarising myself with my favourite paint medium. 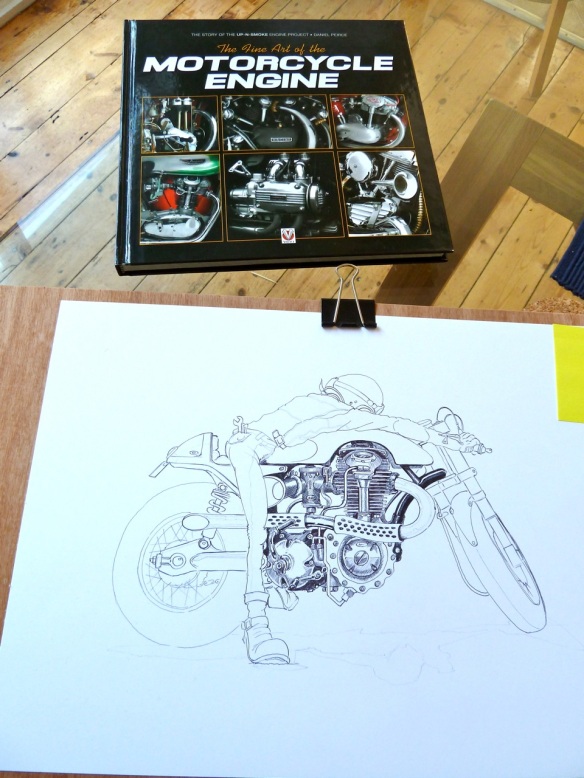 Here is a bit of a teaser image for you too today. It shows me (though I’m not in the shot obviously) about coming up to half way through inking in a drawing of a massively engined single cylinder cafe racer I sketched out ages ago. I’d left it languishing in the sketch pile while I got on with other drawings but, coming across it the other day I thought I’d do something about it now. Of course I’ll put the finished article up on the blog as soon as it’s done for your delectation.

Also in the shot is one of my favourite tools. It’s a book, a fabulous book by a chap called Daniel Peirce and covers the story of a photographic project he undertook called Up-N-Smoke. It is essentially 140 pages or so of beautifully photographed bike engines. All vintages, all types and all lovingly lit. For me it’s a fantastic reference for shading in all of those apparently similar coloured metal parts, how reflections get cast on surfaces and bags of engineering details to feed the imagination for future drawings. It’s published by Veloce books (ISBN 978-1-84584-174-4 ).

There is art to be found in engines, that’s for sure.