Today I was going to post about the next phase of metal bashing for the 250 build but, I’ve changed my mind following a visit to the Ace Cafe yesterday. It was another sunny Sunday in a chain of bright spring weather we’re having here in London, and a short spin up the road was called for. As it happened it was Italian Bike Day at the Ace and I decided to drop in on my way to nowhere in particular and back. I’m glad I did as there is almost always something to be seen up at the cafe that stirs the soul.

I’ve always tried to avoid the temptation, and will continue to resist it, to turn the blog into an endless catalogue of images of stuff that interests me without much comment. There are plenty of those around already for our delectation. But yesterday I was prompted to think that on occasion, when I come across something on my travels that catches my eye I’ll reach for the camera and share it with my readers. So here’s the first one.

First things first, this is a Moto Guzzi that belongs to a sculptor called Ed who lives in south London. Ed put the bike together himself over a number of years and in my mind you can assuredly say that it was built for a purpose by a man with a vision. I love it. It’s a fantastic combination of old and not so old, all wrapped in a patina that one can virtually smell.

It was initially parked quietly on the edge of the “display area”, not attracting much attention unlike the collection of shiny and immaculately turned out exotica that invariably fill the car park on a day like Sunday. It was only when he wheeled it out to centre stage that peoples attention was alerted and a small group of admirers gathered to fire questions at its happy owner. I wandered over, liked what I saw and reached for the camera. For some reason only known to my subconscious it wasn’t important to know the size of the engine, it was big, nuff said, or where all the various parts had come from. It was just a great bike to look at, a true “bitsa” in the best interpretation of the word and displayed an unashamedly honest approach to its engineering and finish. There was nothing flashy about it but Ed’s sense of, and attention to, detail was a breath of fresh air after nearly an hour of shining Ducati specials armed with expensive aftermarket components, and concours standard Laverdas.

It seemed obvious that this Moto Guzzi was built to do the three main things in a bikes armoury well: go, stop, and carve round corners. As I said, I didn’t ask many questions but from the look of the front end, taken from a Ducati Monster perhaps(?), equipped with two huge discs and a pair of Billet 6 callipers it was a serious tool. The front wheel was capped in a wonderfully curvaceous carbon fibre mudguard, it was virtually the only shiny bit on view, though you could still admire the carbon weave below the lacquered surface. Its high tech origins a fine counterpoint to the headlight mounts fashioned from aluminium angle and the double seat which seemed perched atop the frame rails. The whole bike is covered in lovely touches. From the repeated pattern of cut outs on the cylinder head protectors and the battery support plate under the seat, to the small adjustable tie bars that secure the carb tops to the rocker box covers. I can only assume these are to stop the carbs rattling themselves to death. From the modern radial master cylinders for clutch and front brake to the discrete little oil pressure gauge atop the left clip-on by the tachometer. I liked the fact that the fluid reservoirs didn’t match and that the rear tyre didn’t need to be the size of Sussex to look utterly purposeful. 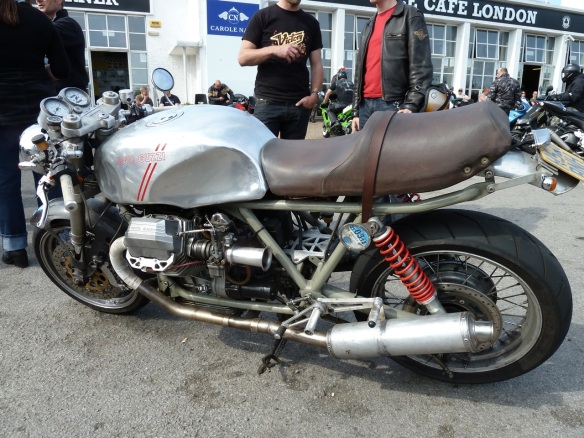 Time and again my eye returned to the frame. I don’t know the history of it but the colour is what I remember most, a lovely kind of duck egg green. Such an unusual colour and it had something aeronautical about it. It reminded me of trips to the RAF museum at Hendon in north London where peering into open undercarriage and bomb bay doors one gets a eyeful of the inner structure of some of the planes, their very skeletons, and they are invariably covered in a coat of greenish paint. So in a way very apt for a big bike frame.

The whole bike though was dominated by the engine and the enormous polished fuel tank. One doesn’t appreciate how big a big Guzzi engine is until you’re up close and personal like this. It’s a fantastic thing, a true statement of engineering purpose and when equipped with two huge carbs and a pair of the most extreme bell-mouths I’ve ever clapped eyes on, one that intends to make the very earth shake.

I could go on. Needless to say I had to go before hearing the beast fire up but, I’m sure this won’t be the last time I see this bike. I’ll be looking out and listening out for it. It was great to meet Ed and learn a little about his fabulous motorcycle, a true testament to the values of creativity and individualism that many of us admire. He says he’s thinking of another project and if it turns out anything like this one it’ll be a cracker. Good luck with that Ed.

One thought on “Every once in a while.”