When I made the decision to share some of my output with the world and start this blog I had very little idea how difficult it would sometimes be to distill thoughts and processes into meaningful words. I suppose rather naively I didn’t realise that I would need to learn to cast a more critical eye over my work. What I mean is that normally when one is making an image you make judgements about what you’re doing all the time but, you don’t have to express them, the conversation happens in your head. Alterations and changes that you want to make are decided silently before proceeding.

Now, up until now I’d been drawing away to my hearts content and was pretty happy with how things seemed to be going. I’d realised that bikes were quite difficult things to draw, they are actually quite complicated things really, but had satisfied myself that I could stick with plain elevational views for the time being, while I learned more about them from a form perspective. Getting a drawing to look right in terms of shape and proportion was quite a challenge to start with. It was surprising that so many of the elements had to come and work together just so the thing looked like, well, a motorbike. There was a lot more involved than I first reckoned. So achieving a drawing which hung together and looked ok  just in line form turned out to be quite hard work to start with.

Fine, and then for some mad reason that even I can’t fathom I started colouring them in.

Great, but what was I thinking? I’m sure I had told myself to stay away from all the myriad colour pencils and pens that litter my workroom. I’m pretty sure I’d had a word with myself about reaching into the drawer for a circle guide or French Curve as well. But no, I couldn’t resist it.

I mentioned in the previous post that something reared it’s head and this was it. Big deal you might think but, it actually created more problems for me than I wanted, and influenced a number of things. For I start I began to think constantly about how I would render the drawing and this influenced the way I drew things at the outset. It also meant that I was covering the drawing in a kind of cloak of realism which I had initially intended to leave out until I’d built up a bit more confidence and competence. I was sat there thinking, “what colour should this bit be?” and “how many spokes should this wheel have?” If I wasn’t careful I’d be diving headlong into the realms of reflections and then there would be no end to it.

I’d done a few line drawings and suddenly found myself staring at a pile of colouring in. I got myself truly stuck in. I’d started with colour pencils as they are my kind of default medium, I’ve always been very comfortable with them, and started piling on the pigment. Here’s another one that got the treatment. 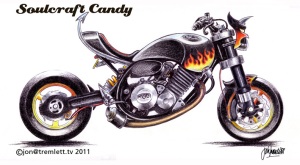 In isolation these aren’t bad drawings, even though I say that myself, but they were lacking something which had been very evident in the first drag bike cartoon. They were a bit dry and lacked a certain something, a dynamism? And there weren’t any people in them.

I was reminded of an old tutor I had when studying at the Central School of Art in London back in the early eighties. In his spare time he would sit at home and paint pictures of vintage cars in gouache and ink. They were impressive technically but, as dry as a bone visually. I looked at my drawings and got a feeling that I was headed, albeit slowly, down some road toward a similar end, spending days painstakingly recreating every last detail in perfect likeness. That was not what I wanted and so had to rein myself in somehow. I knew that there would be a time for lots of colour but it wasn’t now and it wasn’t like this either.

The learnings from this experience were interesting though. Quite unwittingly I’d found myself charging off down a path I had not readied myself to pursue. This is what I think happened. They say that old habits die hard and perhaps this is the case here. Over years of making images to illustrate design ideas one gets into a groove. Not only does each designer develop their own unique style, but I think they also embed within themselves certain ways of doing things. These are like creative habits. If I look back at some of my work from studio days I can clearly see that I went about things in a very particular way. In a sense that’s what I found myself doing now, doing it in a certain way. I was going from sketch to line drawing and then to colour etc etc. For things to be finished they had to be in colour, properly shaded and kind of looking “real”. Despite the fact that the images were not of real things I’d started to try and make them look as real as possible and had found myself “designing” them, which in it’s own way effected the lines I drew. I was sat there worrying about whether they looked real enough, when the whole idea in the first place had been for them not to be real at all. Most importantly the process had started to be less fun. I hadn’t got the mix of ingredients right. Time for a rethink.