For once, having said in the previous post that I was close to finishing a picture, I have done exactly that, and faster than I thought I would too. So here is the finished article. The pictures are the wrong way around today, finished one first, purely because it’s great to open a post with a completed picture. I’m pretty happy with how it has come out.

You will notice that I have left the top of the picture plain white rather than include the very dark area at the top of the reference photo. What drove my decision in the end was the thought that I wanted the main subject to really stand out, surrounding it in big dark bits would have dulled it off too much. So there’s just a hint of ochre wash back there to lift it further. 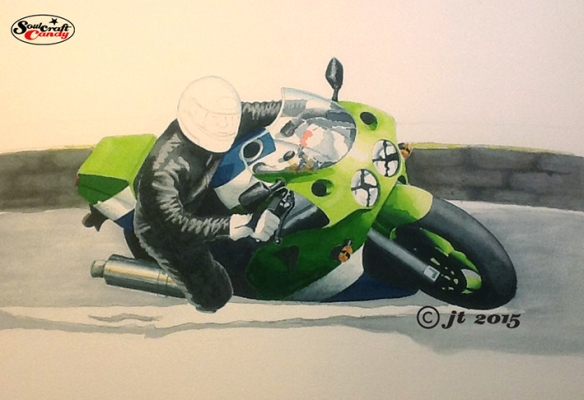 This view, and apologies for my iPad’s inability to take a decent photo in my studio, shows things at about the half way stage. With such dark areas in the image it was a bit of a juggler getting the various tones down in an order where they didn’t conflict too greatly. What helped was mixing two different kinds of grey, one for the riders leathers and the other for the bike area shadows, so I could maintain a distinction between them. The shadow areas go down in a couple of passes with the brush, but the leathers took rather longer, slowly building the tone with much thinner washes. The really tricky bit, doing the helmet and face, came last and again was a slow build. I’m not afraid to admit I find faces and flesh tones quite difficult so going slowly with a small brush gives me the best chance of getting it right. Finally, once all the above is dry, my attention switches to the ground area and their associated shadows, making sure I don’t include too much detail so as to keep your eye focused on the big green thing in the middle.

There is always a process of final fiddling and fettling at the end of the main paint stage. Each time your eye returns to the image after a short break you pick up on little things which just need a small tweak so out comes the tiny brush for some edge honing, some white gouache to bump some highlights up and a colour pencil or two. Some things you can’t adjust so there’s only so much you can do, your biggest challenge is knowing when to stop. This one turned out to be more of a painting than a drawing, something I don’t do that often, but I don’t think it loses anything because of that. Yes, it was a challenge but, it was a fun one to undertake which is just as important.

Thanks for dropping by today and hopefully you’ve enjoyed the post.