Hot off the scanner today is the second completed drawing from the Cafe Racer series. After much humming and hawing over how to finish it off, it seemed most appropriate to mirror the rather stripped down nature of the bike itself with a minimal approach to context. So a simple single line, curving to instill a light sense of speed and motion, got put in under the main image. Attempting to satisfy the persistent and sometimes nagging feeling that a fuller background should be present, I merely ended up filling the waste basket with tracing paper. In some instances, less is more, and certainly in this case it works best. Needless to say I’m more than happy with the outcome.

The first drawing of the series, which featured here a couple of posts ago is now framed, submitted and waiting to be hung in a local open art show here in Ealing. For successful submission it needed a title, and is now called “Full Throttle” which seemed to fit nicely. Enquiring of the gallery staff I learned that they were expecting up to perhaps 300 submissions. A healthy number in anyones book, and indicative of what a creative community we have here in the borough. It will be fascinating to attend the private view tomorrow night and meet some of the other artists. Very exciting, this is the first time I’ve ever shown a drawing and who knows, somebody might take enough of a shine to it to part with some money.

For anyone who might be interested in coming along and having a look, the exhibition runs until the 21st April and can be found at the Walpole gallery which is situated in Walpole Park just by Ealing Broadway, West London. And it’s free to enter.

The remaining drawings in the series are progressing well. My initial selection of sketches to work up seems to be constantly changing. Another idea popped up the other day during a free sketching session during a lunch break, always handy to have a pad and pen nearby, and is shown below. It’s an apparently simple view though I’m looking forward to getting to grips with it, and it should provide a great opportunity to work on my techniques for faces and clothing which are still proving difficult to master. 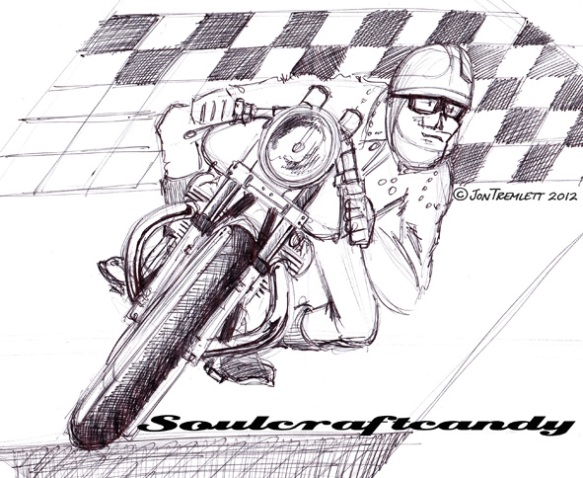