In the previous post I said I’d say a few short things about card, or cardboard, and how it can help during a bike build. A lot of what follows may very well be obvious to some of you but it’s worth saying as there are bound to be some for whom this will be very useful stuff. There are of course a thousand and one things that you can do with card and I’m not going to attempt to cover them all here but, some are really relevant to us when making parts for assemblies when we don’t have full technical drawings to hand or we want to try out ideas quickly without the hassle of wasting precious resources like our stocks of metal sheet etc.

I use card a great deal in my professional life, for both proving ideas and for making complete models of various projects for clients. Some of the resulting constructions are deadly simple and others much more complex. In fact some of the work I’ve been doing over the past year has involved making whole rooms from card as a first step to proving out designs for aircraft interiors, in full size. Extreme card modelmaking in a sense. In order to try and make sense of what can easily turn out to be a quite complicated subject I’ll they and keep the following simple by looking at the two extremes of what mocking things up in card means to me.

Firstly card comes in two basic forms, rigid and flexible, all card being pliable to some degree. Rigid covers everything from foam core, see below, to the grey stuff you find as the backing on a good quality sketch pad. Flexible card is invariably much thinner, only about 0,5mm thick, and usually white. The kind of stuff you can buy at your local art shop. We call it ticket card and it’s much easier to bend, though like all sheet materials it will only bend in one plane. Of course there are many other varieties available but frankly I tend to steer clear of other types for what I consider to be good reason. Here are a couple of examples. Grey or light brown cards that you find on the back of a sketch pad or sold as basic mounting card look attractive because they are thin, about 1- 2mm thick. They look useful enough but have their own problems. Often made of layers of rolled or compressed pulp they can be hard work to cut neatly with a craft knife requiring several passes and a bugger if you’re trying to make fine details, no end of furry edges and corners. They also have a nasty habit of delaminating just when you don’t want them to or cracking, especially when you’ve done your best to score a line in readiness for a neat bend or crease. They other card that I steer clear of is common or garden box card or corrugated cardboard. It’s great for boxes to hold our shoes but useless for virtually everything else. It compresses when you apply the slightest pressure to it, makes your blade wander when cutting and worst of all it has a propensity to bend and crease at exactly the point and time when you least want it to, reducing your carefully prepared mock up into a floppy mess.

Here's one I made earlier.

The picture above, and it’s an old project so probably safe to post without causing any issues, is of a full size proof of concept model for a new business class aircraft seat. This model is made using foam core which is essentially two sheets of thin card with a foam centre, forming a kind of light weight and fairly rigid sandwich. It comes in varying thicknesses up to 10mm thick and is great stuff for creating large pieces quickly and cleanly. This is kind of Rolls-Royce card and is invariably accompanied by details created in more conventional card which is a lot thinner and much more flexible. The point I want to make in showing you this model is that foam card, although a fantastic material when used in flat pieces, is not naturally disposed to going around corners and needs to be encouraged to do so by relieving the stresses on the inside of bends. The striped areas on the model are where you cut through the card layer on the inside of the bend only and any compression in the bend is taken up by the foam core. Of course this technique requires patience in cutting out the strips and has its limits as the card will snap if you haven’t removed enough material from the inside face. Sometimes you have to cut the foam out too in strips just to get the stuff to hold the curve you want. Yes it’s time consuming but the results speak for themselves and one ends up with good sturdy models that retain their shape. This is the kind of stuff I’d use if fleshing out the form for a petrol tank. It’s great for creating all the internal ribbing and support structure which I would then “skin” with something thinner.

The parts that I mocked up in card for the bike build used thin ticket card, and are at the other end of the spectrum to foam core models. It might look bloody simple but again, there are very good reasons for using this material. Its thickness, or lack of it, makes it perfect for marking out and cutting quickly and accurately. A single pass with a sharp blade is usually sufficient. Being thin makes it much easier to cut out fine details and curves, either freehand or using a template. It bends predictably and when gently scored enables very fine bends and creases. Finally, because it’s not that much thinner than thin sheet metal it’s great for making almost facsimile parts which can then be flattened out and used as an accurate template for the final part. Oh, and you can cut it with scissors which is a mighty handy attribute.

Wow, this is turning into a long one. Not much more to go.

When I used to teach at a design school many of the students would say that the above is all very well but how do you glue things together because paper glues all seem to take an age to set. In some instances you can use good old fashioned wood glue or PVA adhesive but generally you don’t want to use even that much time. The secret lies in three small words: Hot Glue Gun. What a fantastic invention. I’ve used various makes and models over the years. Some are no more use than a chocolate tea pot, others much better. In the end I bought my own, it’s a constant companion made by an american company called Arrow if I remember rightly, and it’s the best I’ve ever used and must be over ten years old now. Like all good tool purchases it’s certainly worth buying good quality for a price rather than going cheap only to have to replace it soon after. Hot glue is perfect for mocking up in card believe me. 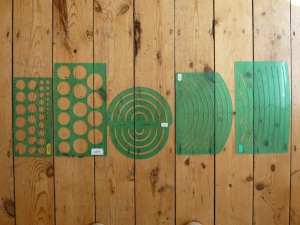 Finally here’s a couple of pics of some of the tools I use when making things in card. A selection of circle and curve templates, some set squares, a decent steel ruler and a small selection of French Curves. Like my glue gun these travel with me everywhere and though they cost a bit to buy initially they repay you in spades, just be careful if using them as cutting guides. The ruler is a narrow, thin and bendy one, great for measuring around curves, saves on all that trigonometry we were supposed to have learned at school! 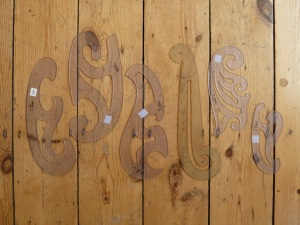 All of the above is great for creating mock ups and templates for our various bike parts but none of them are much good if we don’t have to hand the most important tool of all, a craft knife, or scalpel, with a fresh sharp blade in it.